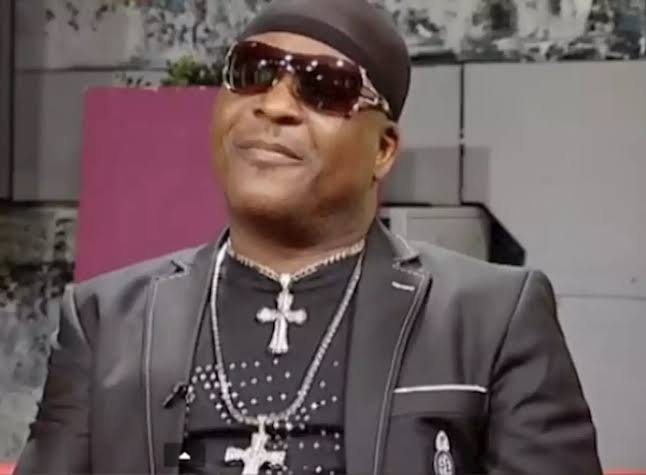 Veteran Nigeria musician and newly ordained Bishop, Shina Peters, has addressed allegations that the late Nollywood actress, Funmi Martins, bore him a son, whom he has abandoned.

Martins was a popular Nigerian actress who passed on in 2002. Her daughter, Mide Martins-Abiodun, followed in the footsteps of her late actor mum. She is also an established crossover actress.

Two months before her death, she welcomed her third child, Damilare, who is her alleged love child with the juju musician.

The claims first surfaced online after a popular Instagram blogger alleged that the boy, Damilare Peters, 19, has been abandoned by his older sister, actress Mide Martins and the music star.

The Juju maestro, who has been married to Sammie since 1995, addressed the claims in a video posted online on Thursday.

He said that he has not been in young Peters’ life for some reasons he would not disclose but has decided to take responsibility for his welfare, henceforth.

The singer, however, failed to establish if he is indeed the boy’s father in his video.

He said, “I am no longer a kid. How can someone like me abandon a child? What would it cost me? I have lost count of how many kids I have raised in my life. I love children a lot, why will I refuse to take care of Damilare? There is a reason for everything but I have chosen to let go of the past and I will never bring it up again.

“I never said I wouldn’t take care of Damilare and it may interest you to know that I have been in talks with him on the phone and I have arranged to meet with Damilare and his uncle that he lives with soon.

“I assure every well-meaning people that have interfered in this matter that I will not disappoint you. I am a father and I have successfully raised a lot of kids, so Damilare’s case will not be an issue.”

The 62-year-old Bishop of a Cherubim and Seraphim church went further to plead with concerned Nigerians who have initiated plans to crowd-fund for the boy to put a stop to it because of his future.

“I want to appeal to everybody concerned to not turn this boy into a beggar that money is being contributed for because of his future.

“Why would people have to raise money for him when there is a person that can look after him? I never said I wouldn’t take care of Damilare but there was an issue on ground before that I have said that I wouldn’t talk about and a lot of people are aware of it,” he said.

“Now that people have stepped in, I will meet with him like I promised and talk to him about what he wants to do and where he’d like me to come in. I heard he wants to go into entertainment but he has to complete his education first because all of my children are educated. He has written JAMB once or twice before unsuccessfully, I will make sure he gets another form and by the Grace of God, he will be successful.”

He added that he was responsible for the upbringing of Damilare’s older siblings since the demise of their mother and has no reason to ignore him, whether he is his child or not.

“I raised his elder brother and sister, Tunde Martins and Mide Martins so why can’t I raise him as well? I am not a father that neglects his children. I love children, whether they are mine or not. I wouldn’t watch my enemies’ children suffer, not to talk of a child that was linked to me. A lot has happened in the past but I don’t need to go back to that because of the future of the child,” he said.

Who was Funmi Martins?
The late movie star ventured into the movie industry in 1993 when she featured in Fidelis Duker’s ‘Nemesis’.

She joined the cast of her first Yoruba movie under the tutelage of veteran actor, Adebayo Salami.

She was one of the few actors at the time, who could act flawlessly in Yoruba and English movies and she made the most of it by becoming a force in the industry in her less than 9-year-old career.

Days before her death, she was working tirelessly on movie sets as she showed no sign of illness.

On May 5, 2002, she got admitted in the hospital because she started to feel unwell and passed on the following morning.

Some of her notable movies include, ‘Ija omode’, ‘Eru Eleru’, ‘Eto Mi’ and many others.

Shina Peters’ other children
Although, not much is known about Peters’ many children, the popular ones have famous mothers.

He is the father of popular Nigerian music video producer, Clarence Peters.

The latter is the result of the Juju singer’s relationship with popular Nollywood actress, Clarion Chukwura.

In 2014, popular fashion stylist and business mogul, Toyin Lawani also revealed that the singer is her step-dad and the father of her late mum, Princess Atinuke Babalola’s last child, Ife.

A claim, the singer has confirmed. He attended her wedding in September 2019 in the UK and shared a video of the father-daughter dance among other snippets from the wedding.

The singer’s most recent music was a collaboration with Teni on her hit, ‘Jo’, which was released in December 2020.

Alleged Paternity Scandal: FCMB to probe MD as many demand his sack