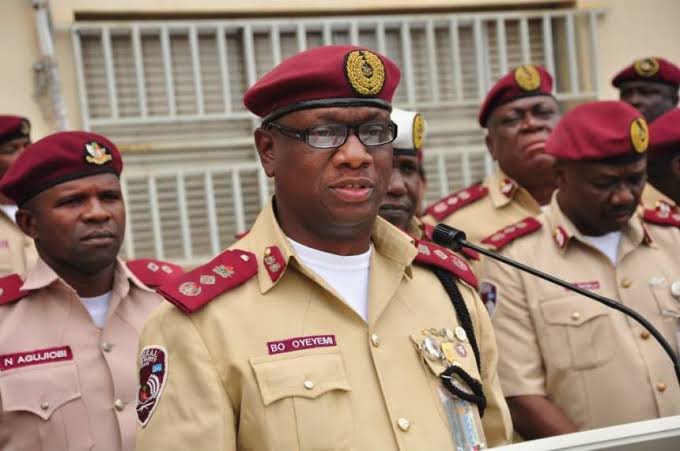 Mr Oyeyemi revealed this when he featured on the News Agency of Nigeria (NAN) Forum in Abuja on Friday.

The corps marshall said the essence of the NIN was to enhance road safety through the use of technology.

The FRSC boss also said that from December, driver’s licence would no longer be issued without the NIN information.

“I must commend the government. With the National Identity Management Commission (NIMC), now we have one national database, one identity. You cannot use double identity now and with the biometrics, you cannot be funny.

“You know before some people have about five different identities but now you are forced to pick one. Once you pick one with NIMC that is what you will be using because it is now going to be as from next month (December). It is going to be compulsory.

“Now if you want to renew your driver’s licence or you want to obtain a fresh driver licence, you must provide your NIN. NIN is the first thing and with that, no biometrics will be done again they will import it from NIMC.

“So I am talking about using technology now to enhance security so with this I think we make progress we are really on course.”

The FRSC boss, Mr Oyeyemi, explained that only the Vehicles Inspection Office (VIO) was authorised to test applicants before prescribed fees could be paid to the state government through their internal revenue service.

He added that the VIO would, in turn, refer applicants for capturing which would be transferred to the database of the country.

“Now a lot of things have been occurring, you cannot get a licence by proxy, anybody that does not go for the physical capture for the first issuance of a licence is not a genuine licence, it is fake.

“I am happy when I came on board, I came on board in 2014, the first thing we did was to establish a verification portal. Where the portal is now done, all those with fake licences disappeared, they now had to go and do a new one.

“A fake licence is N25,000 to N30,000, an original licence is N6,350 but I won’t blame them, it is the ‘bigmanism.’ People are not ready to follow the process and along the line too this NIN information for drivers licence the same thing will come on board before the end of the first quarter next year for vehicle registration.

“If you want to register your vehicle, it is going to be compulsory for you to provide your NIN. These are parts of the security checks. So once you provide your NIN, it makes the matter to be simpler,” the FRSC official said.

He urged the country to take a cue from China and other developed countries that made use of technology to fight crime.

He commended the security agencies for making use of their unrestricted access to the database in checking corrupt practices in the system.

“I must commend all of them from EFCC, NFIU, ICPC, the military intelligence unit of the Army, Navy, Air force and DSS. This is what they are now using, the paperwork is no more because they have access to the database and they are utilizing it effectively.

“The country is growing even though I need to let people know the efforts of Mr President, the country is developing as par 21st technology innovation and we must just catch up with best practices.

“The best practice is for you to have the database that you can use to fight crime,’’ he said.