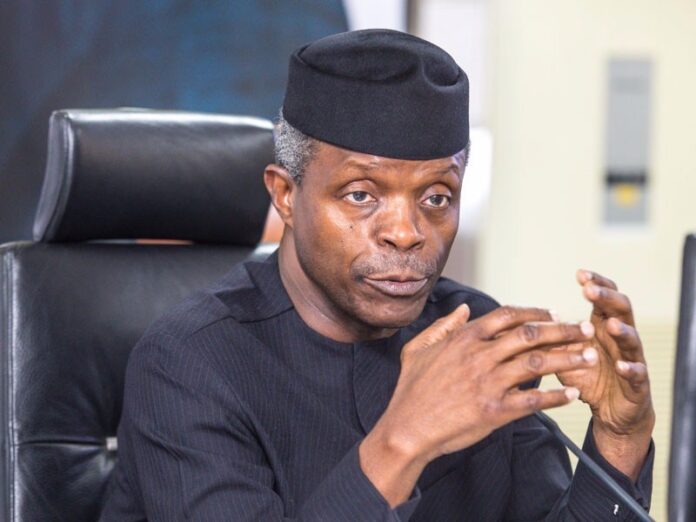 Vice President Yemi Osinbajo, (SAN) has reacted to the disbandment of the Special Anti-Robbery Squad by the Inspector-General of Police Mohammed Adamu and the ongoing protest calling for an end and reform in the Nigerian Force Force.

The Vice President in his reaction on Monday said that the SARS disbandment is the first step to Federal Government’s commitment to the reform in the police.

In a statement by his spokesman Laolu Akande, he said that government is not only committed to full-scale police reform but also ensuring that wrongful acts are duly investigated and prosecuted.

“The disbandment of SARS is the first step in our commitment to extensive police reforms in order to ensure that the primary duty of the police and other law enforcement agencies remains the protection of lives and livelihood of our people.

“The President also spoke, a few minutes ago, about the prosecution of all those (law enforcement agents) who have committed wrongful acts. I think, all these are commitments that have been made. But we must also understand that it is a process. It is not an event. Reform is a process. We must show commitment. Everyone must be interested, and we must stay focussed on the issues.”

On the issue of the ongoing protests nationwide, he said “I think the clear message is that there is a government commitment to ensuring that the process of reform is done and those who have committed wrongful acts are duly investigated and prosecuted. And whatever replaces SARS is something that is acceptable, first of all, in its compliance to all the tenets of the rule of law and human rights.

“These are all issues that we are very deeply worried about. All of us are deeply concerned about it. Many young people have complained to me. I have also been involved in many cases trying to resolve these kinds of conduct.”

Osinbajo further noted that the IGP is committed to ensuring that the unit is not only disbanded but will involve groups and civil society in the participation of the reform.

“The most important thing is that SARS has been disbanded and the IGP has committed to ensuring not only that it is disbanded but also that whatever takes its place has the full participation of civil society groups and all other stakeholders.”