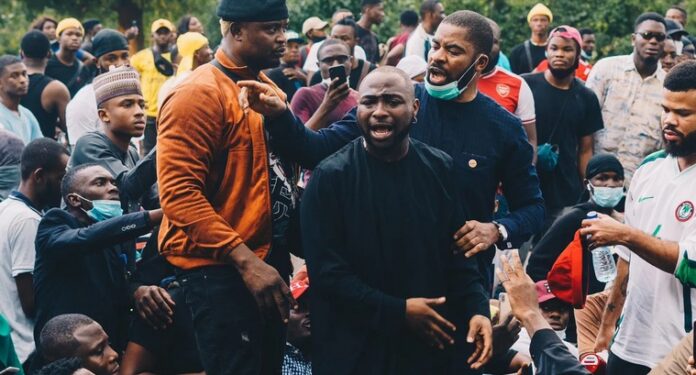 Singer, David Adeleke, popularly called Davido has presented the demands of the #EndSARS protesters to the Inspector General of Police, Mohammed Adamu at the Force Headquarters in Abuja, the nation’s capital.

The demands, according to him include the release of the protesters, justice for all victims of police brutality, among others.

“Our five demands include the immediate release of all arrested protesters. We thank God everybody was released in Abuja yesterday, there are still some people arrested in Lagos.

“Secondly, they want justice for all deceased victims of police brutality and appropriate compensation for their families. Out of everything, this is the most important because if there is reform, you cannot change a life that has been lost.

“Setting up an independent body to oversee the investigation and prosecution of all reports of police misconducts within 10 days. It is impossible to do anything within 10 days, but it is something that should be looked at,” he said.

Davido equally for a psychological evaluation of all officers of the disbanded Special Anti-Robbery Squad (SARS) before redeployment, stressing that the training and retraining of police personnel are important.

On his part, the IGP thanked Davido for the visit, explaining that reports of brutality and infringement of human rights by SARS operatives issue date back to 2017.

According to him, the step taken by the police authorities was to reform the unit to make it more responsive to tackling security challenges.

Adamu explained that this is the first time the squad will be disbanded following numerous outcry from Nigerians, notable youths.

“The activities of SARS have been an issue since 2017. All that the police authorities did was to reform the unit so that it will be more responsive to the society,” he said.

“Changes came up and we still have challenges. This is the first time that a decisive decision. We have never done this before, it has always been reform.”