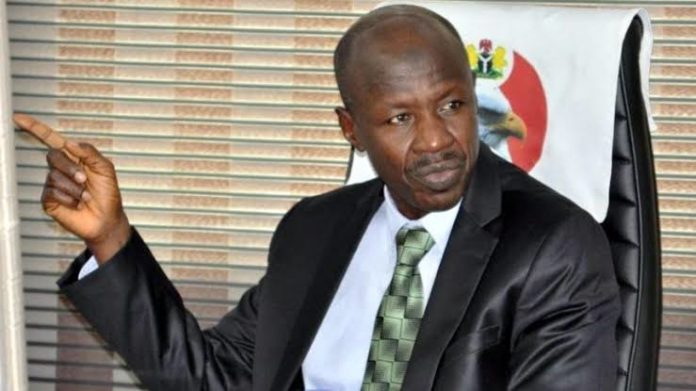 Suspended Acting Chairman of Economic and Financial Crimes Commission, Ibrahim Magu, has denied a media report that he misappropriated the sum of N329bn recovered for the Nigerian National Petroleum Corporation.

He said the fund was remitted directly into NNPC dedicated accounts via REMITTA under a special arrangement endorsed by the oil firm, the Economic and Financial Crimes Commission and the affected indebted marketers.

Magu disclosed this on Sunday in a statement by his lawyer, Wahab Shittu. He said NNPC formally requested the commission to recover the said amount from NNPC’s marketers and in turn confirmed the receipt of the fund.
The statement said the anti-graft agency never took custody of any of the recovered funds.

It reads, “We wish to express our profound gratitude for the successful collaboration between the EFCC and PPMC/NNPC which largely resulted in the huge recovery of debts from the marketers from the inception of the recovery exercise in 2016 till date.

“We appreciate your commission’s professional and diligent handling of the recovery of debts from the marketers throughout the period and we look forward to further collaboration in further areas.

“The issue of NNPC recovered funds has never featured in the proceedings of the panel and our client has never been confronted with such wild allegations.

“Our client is alarmed at the motive behind such spurious allegations in spite of altruistic service to the country without personal pecuniary benefits.”

On the claim that Magu was questioned by the Presidential panel over assets declaration, Shittu said that his client has never been confronted with any of such allegations.

He said the report was false and being orchestrated in the public space to malign and discredit the work of his client in the fight against corruption.

While responding to the claim that Magu failed to explain the rationale for exclusion of culprits in the alleged misapplication of N3bn at the Federal Inland Revenue Service, Shittu said the matter had been referred for prosecution and charges had been prepared ahead of arraignment in court, therefore the question of complicity by Magu does not arise.

Shittu said, “Our client did not give any express or implied directive that anyone indicted be excluded from the legal process. Our client has no interest in shielding anyone found culpable from the long arms of the law. At any rate, time does not run against the state in criminal prosecutions.”

Shittu said his client would no longer be silent in the face of sustained malicious attacks to prejudge him in the public space.

He added, “Take notice that our client can no longer fold his hands in the face of these sustained malicious attacks to prejudge him in the public space.

“Our client will henceforth point by point reply to all false allegations orchestrated against him in the public space on a daily basis as well as present his comprehensive defense for the world to see.

“This is without prejudice to the willingness of our client to defend himself in the ongoing proceedings at the Presidential investigation panel.”