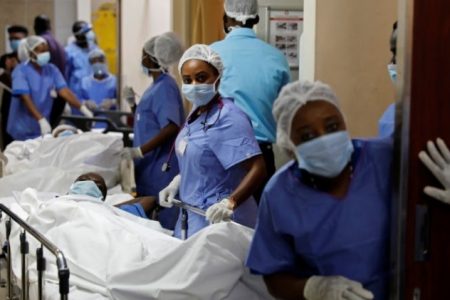 The Joint Health Sector Unions (JOHESU) has notified the federal government of its decision to withdraw its services in all tertiary health institutions across the country starting from Sunday midnight.

JOHESU, the group of other health workers except for doctors, said it reached that decision after a meeting with the government on Thursday yielded no positive result in meeting their demands.

The union also said it was left with no other option but to go on strike since the 15-day ultimatum it gave the government elapsed on Sunday.

JOHESU made this disclosure in a strike notice letter to the labour minister, Chris Ngige, dated Saturday, September 12.

The letter, seen by PREMIUM TIMES on Sunday, was signed by JOHESU national chairman, Joy Josiah; A. A Adeneji, the president, National Association of Nigeria Nurses and Midwives (NANM) and five others.

It came about three days after resident doctors suspended an ongoing strike on Thursday following a meeting on Wednesday with the government which resulted in a truce.

While JOHESU also met with the government on Thursday, the meeting ended in a deadlock.

The media reported how the union said it would embark on a nationwide seven-day warning strike if the government fails to meet its demands which includes payment of hazard and inducement allowance by midnight of Sunday, September 13.

JOHESU said the warning strike will only involve federal institutions while the states and local government health institutions will be placed “on red alert for possible entry into the fray if the federal government foot-drags in attending to our demands”.

JOHESU in July threatened to down tools over what it described as “gross discrimination” against its members in the implementation of the newly-approved inducement and hazard allowances for medical workers.

In the letter to the labour minister, JOHESU said “nothing concrete was achieved at the said meeting with the federal government”, hence the strike notice.

In a phone interview with the media on Sunday afternoon, the national chairman of JOHESU, Ogbonna Chimela, said the union was even irked the more after Mr Ngige again threatened them with, “no work no pay” policy should they insist on embarking on industrial action.

“While some of the government’s proposal was not in tandem with our demands, the labour minister once again threatened us with the no work no pay rule. We responded by letting him know that by embarking on a 15-day ultimatum, due process has been followed, making our strike very legitimate,” he explained.

He reaffirmed the stance of JOHESU that only tertiary health institutions will join the seven-days warning strike.

“After the seven days and our demands are not yet met, the states and even our workers in COVID-19 isolation centres will now join”, he noted.