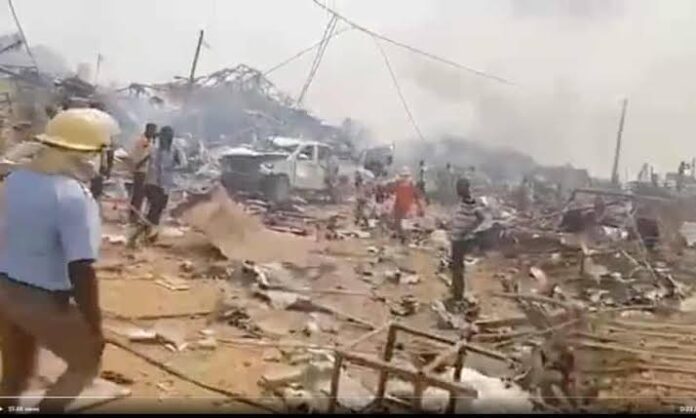 A truck carrying explosives collided with a motorcyle in western Ghana on Thursday, causing an immense conflagration and the “loss of lives”, President Ghana Nana Akufo-Addo.

The accident happened around noon in Apiate, near the city of Bogoso some 300 kilometres (180 miles) west of the mineral-rich West African country’s capital Accra.

Saying the blast caused “the loss of lives and the destruction of properties”, the president added in a Tweet: “It is a truly sad, unfortunate and tragic incident.”

Local police released a statement saying that “preliminary investigation has established that a mining explosive vehicle… collided with a motorcycle resulting in the explosion”.

“Most of the victims have been rescued” and taken to various area hospitals, the statement said.

Others were injured and were taken to hospitals and clinics in the region, police added.

Dr Joseph Dark, working at Apiate hospital, told AFP that five of the casualties had been taken there, “including a five-year-old child who is in a life-threatening condition”.

Police asked surrounding villages to open their schools and churches to accommodate any additional casualties. Reinforcements have been deployed to the scene and people near the blast have been asked to move to nearby villages, the police added, while appealing for calm.