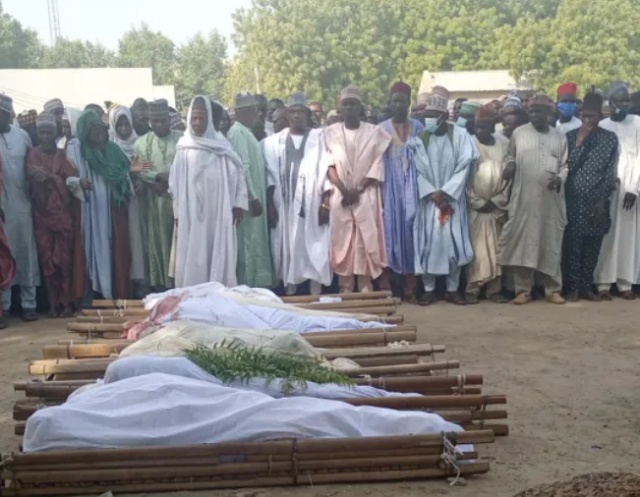 Seven hunters who were on the heels of Boko Haram terrorists Tuesday in Borno were killed after a landmine exploded, witnesses and officials said.

The hunters, who were recently given guns and vehicles to hunt insurgents, died after their vehicle stepped on a landmine planted by Boko Haram on a rough path near a village called Kayamla in Jere local government of Borno state.

One of the survivors, Abubakar Gambo, said they were 19 onboard their patrol truck when they heard a loud bang.

“We were on patrol along Kayamla route when one of the rear tyres of our Toyota Land Cruiser truck exploded,” he said.

“We thought it was a common tyre burst, but we later discovered it was a bomb blast.

While we were trying to change the tyre, we spotted some Boko Haram gunmen creeping towards us. We began to fire in their direction while calling for a backup. Soon, the Boko Haram terrorists fled and left some rustled herds of cows behind.

“Our backup team arrived and began to chase after the insurgents who had already gone far into the bush. As they were making their way back, the vehicle ran over a massive bomb that exploded and killed nine of them instantly, while nine others were injured. I saw their vehicle as it was tossed up into the air.”

The Borno state Commissioner for Youth and Sports, Sa’ina Buba, confirmed the incident during the funeral of the seven slain hunters in Borno.

“We were saddened by the death of these gallant hunters who have sacrificed their lives to protect us.

“We evacuated the corpses and the injured victims to the hospital last night. Seven of them died at the scene of the attack

“We call on the federal government of Nigeria to support these hunters with better weapons and vehicles to enable the hunters to provide the needed support to the military. The hunters know the terrain better and they understand the tactics of the terrorists. If we don’t give support to the local hunters and vigilante, very soon they would be discouraged and the terrorists would overrun our towns again.”

A House of Representatives member, Ahmed Satomi, who represents the area where the attack took place, also confirmed the attack.

“We have just buried seven hunters, God knows how many more would be buried again if the federal government of Nigeria continue to ignore the fact that we need a deliberate policy that will empower the youth vigilante to carry a better weapon that will end this fight. Last week it was the Zabarmari farmer that were buried in mass, today it is the Kayamla hunters.
We can’t continue like this.

At the funeral venue, hundreds of mourners wept as the blood-drenched corpses of the seven hunters were lowered for burial.