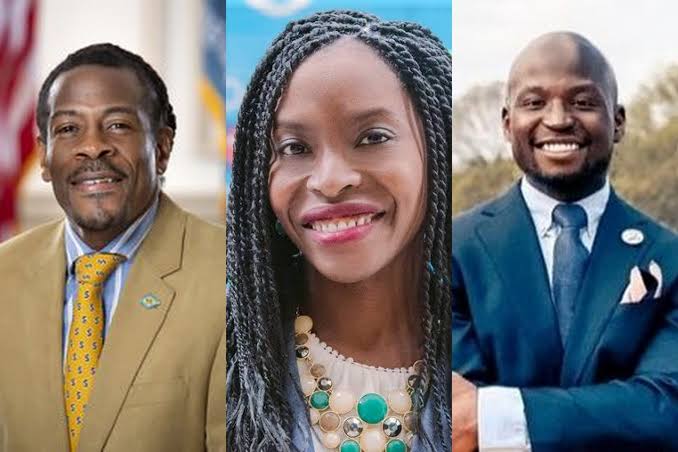 The trio, now winners in the elections they contested in, were part of the nine Nigerian-Americans on the ballot in the November 3 general elections.

Ms Agbaje, who contested to represent District 59B in the Minnesota House of Representatives on the platform of the Democratic Party, won with 17,396 votes.

She is one of the nine Nigerian-Americans on the ballot in Tuesday’s election.

Born to Nigerian parents – an Episcopal priest and a librarian – Ms Agbaje became the first Nigerian-American to be elected to the Minnesota legislature.

With a master’s degree from the University of Pennsylvania, she had a stint in the U.S. State Department, experience working with city government, and accolades at a prestigious law firm, her profile read.

In August, Ms Agbaje was one of four newcomers who defeated established Democratic legislators in the primary – two in the state House and two in the Senate.

She is interested in prison reform, fighting racial discrepancies, housing among others.

She took to Twitter to announce her victory on Wednesday.

“I’m honored to have earned the support and trust of my neighbors to serve as their representative for #MN #HD59B. From North #MPLS to North Loop, Elliot Park to Bryn Mawr, I will work hard everyday to represent this entire district with empathy, compassion and pride.#ThankYou”.

I’m honored to have earned the support and trust of my neighbors to serve as their representative for #MN #HD59B. From North #MPLS to North Loop, Elliot Park to Bryn Mawr, I will work hard everyday to represent this entire district with empathy, compassion and pride. #ThankYou! pic.twitter.com/mPAVx23Iae

Another Nigerian Democrat, Oye Owolewa, was elected as a shadow member of the House of Representatives from the District of Columbia.

Mr Owolewa, who has roots in Kwara and Oyo states, holds a PhD in Pharmacy from the Northeastern University, Boston.

In 2018, he was elected commissioner of his neighbourhood in SouthEast DC.

As an advocate for DC statehood, he launched TaxFreeDC as a movement to combat DC’s taxation without representation.

According to his website, TaxFreeDC declares that until DC statehood is achieved, DC’s tax revenue shall no longer go to the federal government.

“Oye believes our money belongs here for DC priorities instead of going to a government that fails to recognise us,” it said.

He became the first Nigerian-American to occupy the seat.

As the results trickled on Wednesday morning, Mr Owolewa shared the news of his victory on his social media.

“Good morning. Looks like we did it! I want to thank everyone, from family and close friends to DC residents.

“Because of your contributions and sacrifices, I stand before you as America’s first Nigerian-American congressman.

“In this role, I’m going to fight for DC statehood and bring our values to the lawmaking process. While today is the day for some celebration, the hard work also follows.

“Again, thanks so much for everything. I wouldn’t be here without yall,” he said.

Lastly, Nnamdi Chukwuocha won re-election as a member of Delaware House of Representatives from District 1.

Mr Chukwuocha was elected to represent District 1 in the Delaware House of Representatives in 2018.

With a bachelor’s degree in history and a master’s degree in social work from Delaware State University, he has several years of experience in local politics in the state.

He once served on the Wilmington City Council as President Pro Tempore and Chair of the Education, Youth and Families Committee.

He is part of the spoken word duo “Twin Poets” which was appointed as the State of Delaware 17th Poets Laureate.