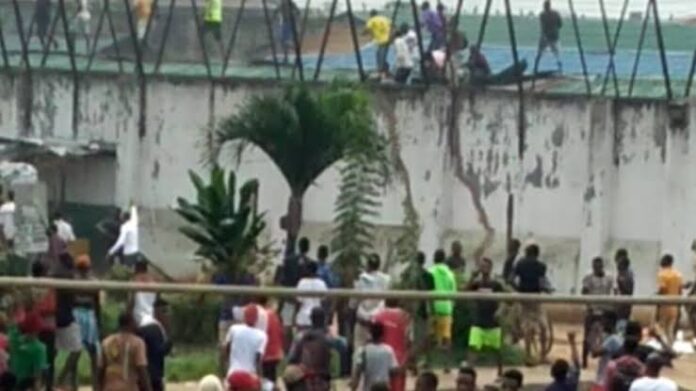 The NCoS in Benin, have narrated how 1,993 inmates were freed after nearly three hours of almost unhindered operation by armed hoodlums.

The separate accounts of the managers of the two Medium Security Correctional Centre (MSCC) indicated that the hoodlums, who came in the guise of #EndSARS protesters, overpowered the few armed officers in the correctional centres, while there were no backups from sister security agencies despite frantic efforts to reach out to them.

The account of how the hoodlums had a field day operating at the correctional centres came to the fore when the Edo State Governor, Godwin Obaseki, led a team of top government officials and other security personnel for an assessment of the centres in Oko and Benin.

At the facility in Oko, also known as the Oko Prison, PREMIUM TIMES learnt that the prison authorities first had an inkling of what was to come as early as 9 a.m. on Monday and called for reinforcement, but none came despite two other repeated attempts.

The 9 a.m. attempt to break into the jail was repelled, according to West Amayo, Deputy Comptroller of Correction (DCC) in charge of Oko prison.

Mr Amayo, who was explaining how the incident happened to Mr Obaseki and his fact-finding team, said the armed thugs returned at about 11.30 a.m. but were again repelled before they came in full force at about 1.30 p.m. where they succeeded in overpowering the armed prison officers, who ran out of ammunition.

“The first set of hoodlums came in at about 9 a.m., they tried to get access, but we repelled them. They went to regroup and came back around 11.30 am, again, they were repelled by our men. At that point, we had locked the inmates in the respective cells but they started shaking all the bars and breaking the windows.

“At about 1.30 a.m. when they came again for the third time, they were more in numbers with assorted rifles and they started firing from afar, from the Airport Road, although my men were replying, but of course, the number of firearms they had overpowered ours. That was how they took over the place. We had 14 armed prison officers, but the ammunition we had got exhausted. We called for reinforcement but none came.”

Several prison officers were said to have sustained gunshot wounds, according to findings by the media. It was not, however, clear if there were casualties among the hoodlums and the missing prisoners.

An injured officer at the Oko prison who was interviewed by PREMIUM TIMES in one of the private hospitals in Benin City said “they were instructed” not to fire at the armed protesters who broke into the cells to free the inmates.

He said they were overwhelmed by the surging crowd of hoodlums who took over the prison environment.

“I just thank God that I am alive to tell the story. We called for backup from the military and other sister security agencies when information got to us that the hoodlums were marching to Oko prisons, but no response of any kind.

“We were ordered from above not to shoot into the armed hoodlums who fired at us. So after exhausting our bullets we had run for our safety. That was how I had run for my dear life,” the official said, asking not to be named for fear of victimisation.

Mr Amayo also told the governor and his visiting team that the records of the prison inmates had been burnt.

The media observed that the record department and other ancillary units in the administrative section of the prison were completely vandalised and burnt.

Mr Amayo said, “The records department was completely razed. Although we have a backup record.”

He said there were 182 inmates in the facility when the governor visited, saying “they include five inmates on life imprisonment, out of which one returned on his own after the jailbreak.”

“At the moment, there are 182 inmates in the facility. They include those on awaiting trials, already convicted, and lifers (life jail). We have four lifers that remained. One of the lifers came back on his own on Wednesday,” Mr Amayo said.

Meanwhile, Mr Obaseki said it would have taken a lot of planning before the hoodlums struck.

The governor said, “If at 1.30 p.m. when they finally gained access and they were able to get everybody out by 4 pm, in a three-hour operation, it means it was a lot of planning.”

A Deputy Inspector General of Police, Celestine Okoye, who was among the assessment team, noted that “there must have been crisscrossing of information between the inmates and the jail breakers before the incident happened”.

Mr Okoye said, “Most times, what you do not hear outside is heard in the cells. They have a serious information flow and the operational preparations are done mostly inside the prison yards before they are carried out. I am sure that there was a crisscrossing of information.”

Also, at the Benin prison located along the Benin-Sapele Road, the manager of the facility, Andrew Egbobawaye, who conducted Mr Obaseki round the facility built-in 1906, said the armed protesters took them by surprise.

“A group initially came in the morning, but we thought that they were peaceful protesters, so, there was no confrontation. Within moments, another group came with five AK47 rifles and before we knew it, there were gunshots everywhere.

“As I and my squadron leader were strategising, we saw that they came in with ladder, they opened the roof and gained access to the facility. They freed the prisoners by breaking through the ceiling and passing through the roof. Eventually, that was how they opened up everywhere. This facility was built in 1906.”

Earlier, the NCoS said a total of 1,993 inmates escaped from the two facilities after Monday’s jailbreaks.

However, Babayo Maisanda, Comptroller of Correction, Edo State Command, disclosed that 1,818 escaped inmates were still at large, while 163 have either been recaptured or secured.

Mr Maisanda said there was need to further secure and enhance repairs to the damaged facilities to secure the inmates already captured.

He said, “It is pertinent to note that all efforts of securing our facilities for over six hours of the siege were solely by the men and officers of the correctional service.

Two Children ‘Abducted’ From Lagos By Nanny Rescued In Benin-City

‘Many killed’ as cult groups fight in Benin

Hushpuppi released from Prison in Chicago.