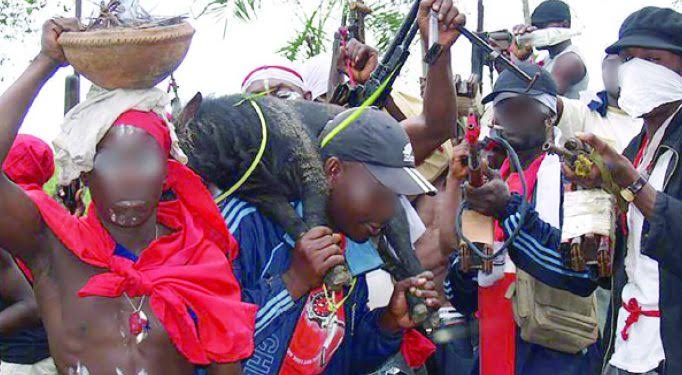 Clashes between Aiye and Vikings cult groups have persisted in Benin City, the Edo State capital, with many killed.

On Saturday, different witnesses said at least 18 persons might have died in the last one week.
The corpse of an unidentified youth was discovered in the early hours of Saturday along the Uselu-Lagos road by Uselu Motor Park/Edaiken junction in Egor Local Government Area of the state.

Also, at Oni street junction, off Abaligbe Street, and elsewhere at Oghuru junction in Iguosa along Benin-Lagos expressway, two other bodies were found on Saturday morning after the hoodlums struck in the area late Friday.

No reason has been given for the bloody encounters, but sources claim it was an issue of supremacy between the two groups.

On Friday, an Assistant Commissioner of Police in Benin was shot alongside two other policemen along Murtala Muhammed Way close to Third East Circular Road junction in the state capital City.

The three policemen reportedly went to the Upper Sakponba area to maintain peace when one of the rampaging rival cult groups opened fire on them.

They were initially believed to have died from the gun wounds, but the state Commissioner of Police, Johnson Kokumo, said they were responding to treatment in an undisclosed hospital in Benin.

Soldiers have been deployed to the troubled areas in Upper Sakponba, Idogbo, Three House junction, and adjoining locations where the activities of the cultists were beginning to affect the safety of residents.

Learnt that between Monday and Saturday, 18 persons have reportedly lost their lives in the violent clash between the two cult groups.

The corpses, which littered different locations of Benin City and adjoining towns have sent a negative signal to businesses, markets, schools, and banks along the Upper Sakponba, Ugbekun, Murtala Mohammed Way, and Idogbo areas of the capital town.

Residents within the areas have since abandoned their homes for fear of being targets.

Our correspondent, who went around the city on Saturday, observed that most of the corpses have been evacuated. A body was sighted at Abaligbe Street junction along the Benin-New Lagos Road.

At Omoruyi Street in Isihor community, a resident of the area identified one of the victims as Kelly Ewemade.

A distraught father of one of the dead victims at Omoruyi Street, Etinosa Osifo, said, “I was in the house yesterday (Friday) when two boys came and called out my son. Before I knew what was happening, they killed him. That was how I saw it. I do not know who to meet for help over my pains and predicament now. He is gone.”

At the popular Mission Road and King Square, there was a daylight robbery of persons in the early hours of Saturday which made motorists and other road users to scamper to safety.ADVERTISEMENT

Meanwhile, Mr Kokumo said his men are working within existing limitations to restore normalcy to the state. He said the development was the after-effect of the EndSARS protest which was hijacked by hoodlums.

He disclosed that the three policemen shot on Friday by hoodlums were recuperating.

Mr Kokumo said, “You can imagine what it means that three police stations along Sakponba Road were destroyed and burnt, patrol vehicles destroyed in several other parts of the state capital, all the officers in these stations now operating from the headquarters.

“The EndSARS protest was hijacked by hoodlums and it took a violent turn in Edo State and prisoners were set free, what do you expect?”

Meanwhile, escapees from the two Medium Security Correctional Centres in Benin have reportedly been sending threat messages to policemen who investigated and prosecuted their convictions.

Mr. Kokumo confirmed that some of the fleeing inmates that escaped from the two correctional centres during the EndSARS protest have been sending threat messages to policemen who investigated and prosecuted them.

“One of the escapees who was convicted for murder went that same day to kill the prosecution witness in his village but he was rearrested immediately. Everybody must be part of the restoration of sanity.

“People who know these escapees should avail us information about them. But I am assuring you that we are not sleeping but with what has happened to the police in Edo, some of these hitches are expected.

“But we are not sleeping and we will continue to work. As I speak to you I am on my way to visit three of our personnel, an Assistant Commissioner of Police and two inspectors who were shot, they recuperating.”