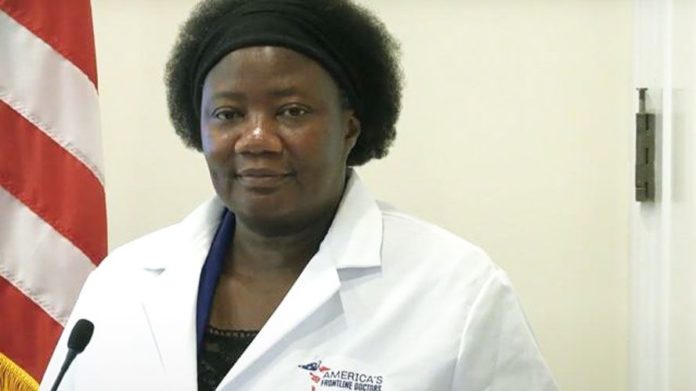 While cases of COVID-19 are rising in twenty-five states, President Donald Trump’s new favorite coronavirus doctor, Stella Immanuel, MD, falsely claims there is a cure for the disease, says we do not need to wear masks, and tweeted a “double dog dare” at Anthony Fauci, MD, to give her a “urine sample” in order to expose him for taking hydroxychloroquine.

Featured in a viral video created by the media outlet Breitbart that has since been pulled from Facebook, Twitter, and YouTube for spreading dangerous misinformation, Immanuel is a Houston-based physician affiliated with the group America’s Frontline Doctors and also the founder and pastor of Fire Power Ministries.
Here are a few things you need to know about Stella Immanuel, the doctor who President Trump said he thought was “very impressive” on the same day Florida set a new record for coronavirus deaths.

1.) Immanuel says you do not need to wear a mask. She also believes in entanglements with demons.

Stella Immanuel’s ideas about science are out of touch with reality, yet President Trump—who opposes vaccines, wind farms, and environmentally friendly lightbulbs—retweets and ostensibly supports them.
Immanuel describes herself as “a prophet of God,” believes “children need to be whipped,” claims doctors use “alien DNA” in experiments, warns that witches may poison women with demon sperm during sleep entanglements, and that’s only some of it.

What makes Immanuel laughable in not a “ha ha” kind of way, but in a “we’re all going to die” kind of way, is that she tells her followers, while wearing a white coat, “you don’t need a mask,” although wearing one is the single easiest and most important thing we can do right now to save each other’s lives.

“Like many diseases, the best treatment is prevention. By keeping away from crowded, indoor areas and wearing a mask when near other people, we can decrease transmission and stop the spread of this virus,” said Joshua Geleris, MD, an internal medicine doctor at Columbia University Medical Center.

There aren’t two sides to this story: masks are simple and effective ways to prevent the very contagious coronavirus from spreading. We have laboratory studies that show masks work, and other studies that confirm mask mandates slow the spread of the disease in the US and other countries.

“Masks may be the only thing between us and the abyss right now,” said Neil Schluger, MD, chairman of the New York Medical College Department of Medicine. Even so, some people worry that masks themselves may make people sick by causing them to inhale carbon dioxide, a worry that is thankfully unfounded.
“For a hundred years, doctors and nurses have worn these for 12 to 24 hours at a time with no ill effects,” said Sara Keller, MD, MPH, an infectious diseases doctor at the Johns Hopkins University School of Medicine. “Wearing a mask shows that you care about those around you.”

You don’t need a Magic 8-Ball—whose psychic power Immanuel also reportedly warns against, their reach into the future is too powerful—to know what will happen if we follow her advice about masks: people will get sick and die preventable deaths.

2.) Immanuel says there is a cure for coronavirus. There is not.

The reason why Immanuel dangerously advises that you do not need to wear a mask is because she believes hydroxychloroquine is the cure for coronavirus and “big tech” is suppressing it, which is ironic because the hydroxychloroquine obsession can be traced back to a tweet from Elon Musk.

Hydroxychloroquine is the anti-malarial drug which President Trump first mentioned as a coronavirus treatment on March 19 and unfortunately has been scientifically proven to be ineffective against the virus. On June 15, its emergency authorization was revoked by the FDA.

“While there was hope at the beginning of the pandemic based on some analyses in the test tube, this has not panned out,” said Jason Pogue, PharmD, an infectious diseases clinical pharmacist at the University of Michigan.

“There is enormous consensus in the medical scientific community about this,” said Dr. Schulger, whose team published the first study that showed hydroxychloroquine is not an effective treatment.

Hydroxychloroquine does not work—not for people who are hospitalized, nor for people with milder symptoms, according to Eli Rosenberg, PhD, the lead author of a large study of patients in New York.

Every study of this drug that compared it with a sugar pill found it was no better than getting nothing. “At this point, we have conclusive data from clinical trials that it does not work,” said Jason Gallagher, PharmD, an infectious diseases pharmacy professor at Temple University.

3.) Immanuel not only recommends a drug that doesn’t work, but one that could hurt people with heart problems or on other medications.

“Every single one of us wishes hydroxychloroquine worked. We would love to have a cheap, relatively safe, oral therapy to treat our patients. Unfortunately, that isn’t the case,” said Pogue.

Though most experts we interviewed agreed that hydroxychloroquine was unlikely to be harmful to most otherwise healthy patients, there are some cases in which the drug can have dangerous side effects.

“Hydroxychloroquine is known to slow the conduction of the heart, which is usually small enough that it doesn’t really matter. But where you can get into trouble is if you have cardiac issues or are taking multiple drugs that do that,” explained Sara Lofgren, MD, an assistant professor of medicine at the University of Minnesota Medical School and an author of three studies of the drug.

One combination that is potentially risky, especially outside of a controlled hospital setting, is hydroxychloroquine plus azithromycin, said Dr. Lofgren.

Not only is there a risk of taking that combo, but there is no benefit, according to a study that was released six days ago.

Despite the overwhelming evidence that says this combination either doesn’t work or might even hurt you, it is exactly what Immanuel says is the coronavirus cure, which is also the one that President Trump endorsed.

4.) Immanuel’s advice isn’t harmless. It may make the pandemic worse and last longer.

States such as California, Florida, Texas, and Washington are cycling through grand reopenings and grand reclosings, as people understandably are anxious to return to their normal lives, but viruses do not get bored, and so cases and deaths continue to rise.

While messages like Immanuel’s may be appealing because they promise a definite cure and certain end to the pandemic (a feature of most conspiracy theories), they have the potential to accomplish the opposite.

Already, some patients refuse to take drugs that we believe work. “Disinformation is extremely harmful. It can (and has) led to patients coming into the hospital and deciding not to take remdesivir because they have been misinformed that hydroxychloroquine is an effective regimen,” said Pogue.

“If a percentage of the population does not listen to data and avoid wearing masks, and focuses instead on treatments that have been shown to not help at all, it will be a very long time before things can get back to normal,” said Dr. Keller. For the families of the more than one hundred and fifty thousand (and counting) dead in the United States alone, maybe never.