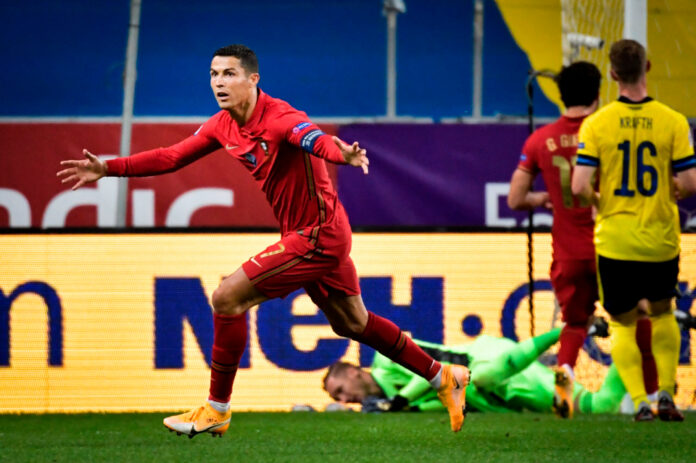 Multiple Ballon d’Or winner Cristiano Ronaldo wants to score more goals for the national team after he crossed the 100-goal mark for Portugal in a 2-0 win over Sweden, Tuesday.

The former Manchester United forward who is overjoyed on reaching the milestone, took to his social media handle to describe it as a “historic goal” for A Seleção.

“Huge pride in this historical goal for our national team!” he wrote on Instagram on Tuesday evening. “When they tell me I can reach 100, I say it’s not enough…101 goals for Portugal.”

The 35-year-old Juventus attacker curled in a free-kick from 25 yards over the wall and into the far left corner beyond Sweden’s stranded goalkeeper Robin Olsen for a memorable milestone in his trophy-laden career.

The bonus second goal, and his 101st, came in the 72nd minute, with the former Manchester United and Real Madrid player cutting back inside the Swedish defence and producing a deft finish into the far corner from 20 yards.

After making his first senior international appearance as an 18-year-old in 2003, Ronaldo notched up his first goal for Portugal in a 2-1 defeat by eventual winners Greece at Euro 2004.

Ronaldo, capped 165 times by Portugal, is second only to Iran’s Ali Daei, on 109, in the list of top men’s international goal scorers.

Incredibly for Ronaldo, just 17 of his 100 goals have come in friendly matches, and his nine hat-tricks all came in FIFA or UEFA tournaments or qualifying games.

Portugal are leading Group 3 in League A, with the Sweden victory and massive 4-1 win over Croatia on Friday, giving them six points in two games played so far.