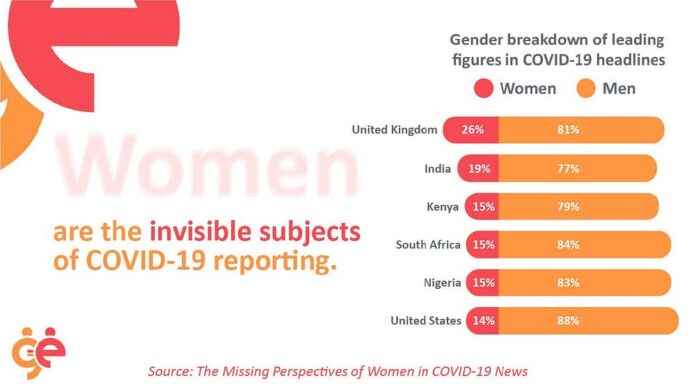 The voices of men have “drowned out” those of women in the coverage of COVID-19 related stories in Nigeria as they are likely to be quoted nearly five times more frequently in reports than women, a September report has found.

The report analysed 2,100 sampled quotes from 80 publications across six selected countries, including India, Kenya, Nigeria, South Africa, the U.K. and the U.S.

The report – titled the missing perspectives of women in COVID-19 news – was commissioned by the Bill and Melinda Gates Foundation, and it examined women’s representation in COVID-19 news gathering and coverage in those countries.

It said it discovered a “substantial bias towards men’s perspectives in both news gathering and news coverage of the pandemic,” an attribution it gave to women’s political underrepresentation in the COVID-19 response team in six sampled countries.https://tpc.googlesyndication.com/safeframe/1-0-37/html/container.html

Authored by Luba Kassova, the director of AKAS, an international consultancy firm, the report analyzed the news content of 11,913 publications and 1.9 million stories between March 1, 2020, and April 15, 2020, in a bid to measure gender equality coverage, and of 80 publications between the same dates for the protagonists and experts indicators.

It also detailed a portrayal analysis of 175 COVID-19 and coronavirus news stories within the said dates, published by the five most viewed online news platforms in each of the six countries of interest.

Women, it found, in five of the six analysed countries are “largely locked out” of COVID19 and coronavirus-related decision making at a national level.

“In times of crisis, journalists may be falling back on well established sources who tend to be men,” the report read.

“Women were four times less likely to feature as experts and commentators in the 175 most highly ranked COVID-19 and coronavirus stories from the top five providers in each of the six countries, identified using Google’s news search engine.

“Women constituted 19 per cent of experts vs. 77 per cent men (4 per cent were unidentified) in the 175 most highly ranked COVID-19 and coronavirus articles across the six countries, identified via Google’s news search,” the report noted.

“The absence of women’s perspectives in COVID-19-related news coverage means that women have limited influence over the framing of the crisis in the news and consequently, limited influence over policy decisions,” the International Women’s Media Foundation (IWMF) wrote about the report in a brief on its website.

“As a result, women are at ever-greater risk of being further marginalised amid the most significant global health crisis of our lifetimes.”