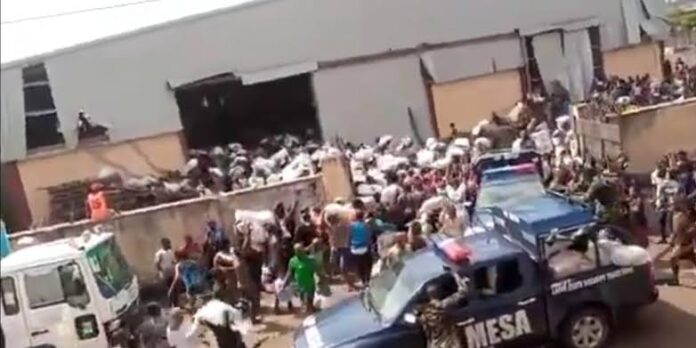 SERAP’s petition followed reports that some people have discovered and taken away COVID-19 palliatives stored in warehouses in several states.

The Socio-Economic Rights and Accountability Project (SERAP) has asked the Independent Corrupt Practices and Other Related Offences Commission (ICPC) to “promptly, thoroughly, transparently and effectively investigate the circumstances surrounding the alleged hoarding of COVID-19 palliatives in warehouses in several states, which ought to have been distributed to the poorest and most vulnerable people during the lockdown, and to publish the outcome of any such investigation.”

SERAP’s petition followed reports that some people have discovered and taken away COVID-19 palliatives stored in warehouses in several states.

SERAP in the petition sent to Bolaji Owasanoye, Chairman, ICPC, asked the agency to “ensure the prompt and effective prosecution of anyone suspected to be responsible, if there is relevant and sufficient admissible evidence of hoarding and diversion of the palliatives.”

In the petition dated October 24, 2020, and signed by SERAP deputy director, Kolawole Oluwadare, the organisation said: “It would seem that Nigerian authorities asked people to stay at home as a protective lockdown measure but then failed to discharge a legal responsibility to timely, effectively, and transparently distribute COVID-19 palliatives to ease the hardship faced by the poorest and most vulnerable people.”

SERAP also said: “Unless promptly investigated, the allegations of hoarding and diversion would undermine public trust in any efforts to bring the spread of the pandemic under control, exacerbate the negative impact of the crisis, and deny those most in need access to basic necessities of life.”

SERAP argued: “Tracking, monitoring and ensuring COVID-19 palliatives are timely, effectively, and efficiently distributed to those most in need would improve transparency and accountability, respect for human rights, as well as remove the possibility of political considerations or bribery in the distribution of the palliatives.”

SERAP expressed: “serious concerns that the alleged hoarding of COVID-19 palliatives in several states and the apparent failure to timely, effectively, efficiently, and transparently distribute the palliatives and other reliefs to the poorest and most vulnerable people have continued to deny many citizens the much-needed support.”

SERAP also urged the ICPC “to visit the states where COVID-19 palliatives have been discovered in warehouses, and to track and monitor the distribution of palliatives across the 36 states of the country, and the Federal Capital Territory, Abuja, to remove the risks of diversion, and ensure that the palliatives get to those most in need, and not used for political or corrupt purposes.”

The petition, copied to Itse Sagay, Chairman, Presidential Advisory Committee Against Corruption (PACAC), read in part: “Some people have reportedly discovered and taken away COVID-19 palliatives stored in warehouses in several states including Cross River, Edo, Ekiti, Kwara, Kaduna, Lagos, Osun, Plateau and Taraba states, with some of the people reportedly saying: ‘the food is ours but they are keeping it for themselves’.”

“Promptly attending to these recommendations would show your agency’s willingness to proactively exert your mandates, as this would act as a deterrent against breaches of Nigeria’s constitution, anti-corruption legislation and international standards, as well as ensure the transparent and accountable distribution of COVID-19 palliatives and other reliefs.”

“SERAP notes that billions of naira have been budgeted and donated to respond to COVID-19 and help ease the resulting impact and hardship on the poorest and most vulnerable people. Nigeria has also received millions of dollars in international aid and announced programmes to help citizens through the lockdown, including direct distribution of food to millions of vulnerable households.”

“This request is consistent with the Nigerian Constitution 1999 [as amended], the Independent Corrupt Practices and Other Related Offences Commission Act, and the country’s international obligations including under the UN Convention against Corruption, the International Covenant on Economic, Social and Cultural Rights and the African Charter on Human and Peoples’ Rights. Nigeria has ratified these treaties.”

“The request is also consistent with the COVID-19 transparency frameworks that have been put together by the Nigerian authorities.”

“These include: the framework on delivering a transparent food ration distribution for the National Home-Grown School Feeding Programme; Framework for the Management of COVID-19 Funds in Nigeria under the Treasury Single Account by the Office of the Accountant General of the Federation; Guidelines for the Conduct of Procurements that respond to COVID-19; and the Accountability and Transparency Mechanisms for Delivering the Cash Transfer by the Humanitarian Affairs.”

“In particular, Section 15(5) of the Nigerian Constitution provides that ‘The State shall abolish all corrupt practices and abuse of power.’ Similarly, the UN Convention against Corruption requires the authorities to ensure effective, proportionate and dissuasive sanctions and penalties for hoarding and diversion.”

SERAP, therefore, urged the ICPC to put pressure on federal and state authorities to: