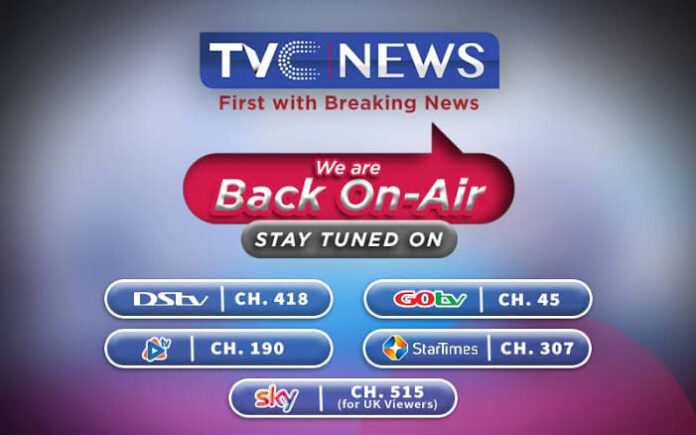 The media firms were raided in the aftermath of the attack on protesters in Lekki.

Days after its headquarters in Lagos were attacked by arsonists, the management of TVC Communications, owner of television continental (TVC) and Max FM, a radio station, said the stations have resumed operations.

In a statement signed by its chief executive officer, Andrew Hanlon, the company, which also owns another radio station based in Ondo State, Adaba FM, thanked its audience, advertisers and sponsors globally. It said but for their staunch support, a total of 550 full-time employees would have been jobless as a result of the attack.

This is coming less than 24 hours after another media house, The Nation newspaper, announced resumption of operation, following a similar attack by hoodlums.

Both the TVC and the newspaper are linked to a former governor and leader of the All Progressives Congress, Bola Tinubu. Mr. Tinubu has been a accused by some of playing a role in the recent Lekki attack on protesters.

According to the statement, several workers on duty were injured “in the attack by a large mob who stormed the grounds wielding machetes, knives, and petrol bombs which were used to torch dozens of vehicles and the main broadcast building which housed the studios and production offices of TVC News and our entertainment channel, TVC.”

The media had earlier reported Wednesday’s violent attack on the stations with about 20 policemen who were on guard fleeing the scene as soon as the hoodlums forced their way into the complex.

The company’s management condemned the attack, saying as a professional media firm, it has remained unbiased and balanced in its reportage.

The statement further reads; “TVC Communications, which owns and operates our TV and radio stations, including Max FM and Adaba FM, condemns this senseless attack on a company which endeavors merely to disseminate unbiased and balanced news, information and entertainment programmes to Nigerian audiences at home abroad, and which supports the livelihoods of 550 full-time employees and thousands more indirectly.

“The devastation caused to our property could have destroyed all those jobs and left many of our dear employees destitute and penniless. Thankfully however, as a successfully managed commercial enterprise which enjoys the support of advertisers and commercial sponsors, we are fortunate to have the resources to maintain full employment and to rebuild our business.”

The company, therefore, calls on appropriate authorities in the country to bring “those responsible for the billions of naira of damage caused to our business to justice, and that all necessary steps will be taken to protect our employees and property going forward.”

Mr. Hanlon paid glowing tribute to the staff of the company, who he noted suffered both physically and emotionally. He, however, promised both the staff and the audience, the figure of which he quoted 11 million, that it is a new dawn at the station.

“Today marks a new beginning in our chapter as one of Nigeria’s largest broadcasting and media companies,” Mr. Hanlon added

I dared consequences to rescue my wife from TVC attackers – Survivor