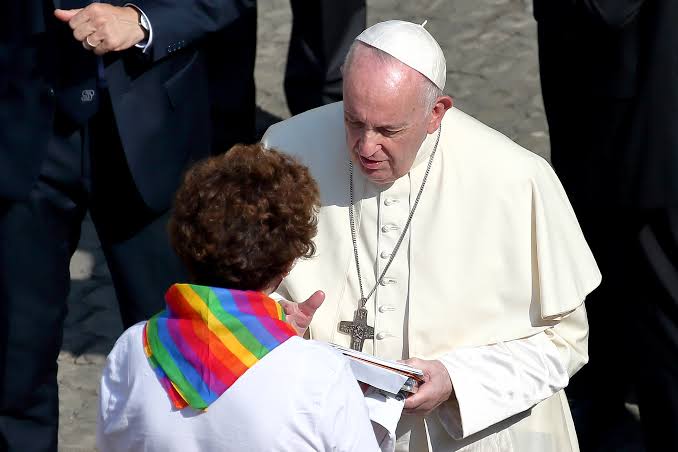 Pope Francis, Jorge Mario Bergoglio, in a move that looks to further amplify heated divergences on abnormal unions has given his most clear support to same-sex marriage.

The Pope made the remarkable declaration in “Francesco,” a new documentary film directed by Russian filmmaker Evgeny Afineevsky, that premiered at the Rome Film Festival on Wednesday, according to the Catholic News Agency, the CNN reported.

“Homosexual people have a right to be in a family. They’re children of God and have a right to a family. Nobody should be thrown out or be made miserable over it,” he said in the film which also explores the Pope’s work and views in other issues, including climate change, migration and economic equality, according to the film’s website.

“What we have to create is a civil union law. That way they are legally covered,” the Pope said.

The film is set to premiere in North America on Sunday during the SCAD Savannah Film Festival, the CNN reported.

Pope Francis has been subtly throwing support for gay people since he was elected in 2013.

“The key is for the church to welcome, not exclude, and show mercy, not condemnation. If a person is gay and seeks God and has goodwill, who am I to judge?” the pope said back in 2013, according to a report by the BBC.

Even before he became pope, as archbishop of Buenos Aires, Francis had endorsed same-sex union after debates on whether to legalize such arrangement sprung in Argentina.

However, his latest comments in the film the producers hoped would be allowed to streamed from homes is the first time Francis as pope would openly endorse same-sex union.

Divergent views
The pope’s conservative opponents were enraged by his statements, according to the Guardian UK, regarding it as part of an effort to shift the church towards progressive values. Some even accusing him of heresy.

His views were a sharp contrast of his predecessor, Benedict XVI, who had in a famous remark labelled homosexuality “an intrinsic moral evil.”

The Guardian UK reported that in 2003, a Vatican document “set out why it was necessary to oppose legal recognition of homosexual unions because they “obscure certain basic moral values and cause a devaluation of the institution of marriage”.

Several countries around the world has held contrary views on legalizing gay marriages.

Acts of gay sex are illegal in at least 30 countries across Africa where persecution of gay people still prevails.

Even in countries where it is legalized, gay people still face a lot of discriminations and stringent legislations.

In June, before Poland’s second round of presidential elections, incumbent Andrzej Duda presented a draft amendment to the constitution that would ban gay couples from adopting children.

Nigeria is among countries yet to legalise Lesbians, Gays, Bisexual and Transgender [LGBT] unions.

Former Nigerian President Goodluck Jonathan signed a bill in 2014 criminalising same-sex relationships in Nigeria, despite pressure from Western governments to preserve the rights of gay, lesbian and bisexual people.

The Same-Sex Marriage Prohibition Act (SSMPA) bans gay marriage, same-sex “amorous relationships” and membership of gay rights groups with penalties of up to 14 years in prison.

“Persecution of gay people are also rife across the country,” the Reuters reported in 2017.

“Many African political and religious leaders argue that decriminalising homosexuality would be akin to promoting it and that it goes against their traditions and culture,” the report noted.

Meanwhile, in recent times, there has been some growing acceptance of gay men, women and transgender in Nigeria with the likes of “Bob-risky” gaining popularity, even with his gay antics.

A 2017 survey by NOI Polls which compared attitudes towards LGBT people in Nigeria against a 2015 poll showed a growing acceptance of such abnormality.

COVID-19: Pope Calls For Vaccines For The Poor In Easter Message