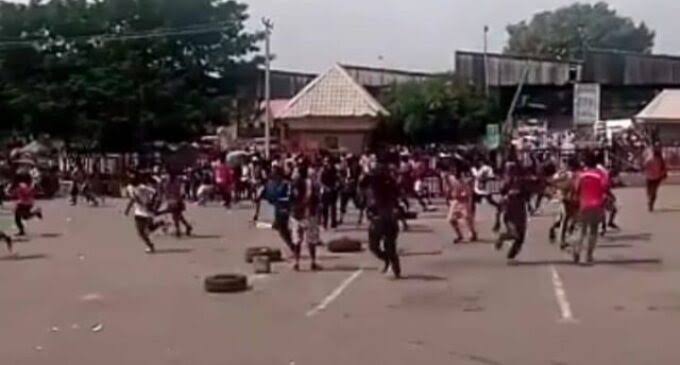 Screengrabs from a video showing a crowd attempting to loot an Arts and Culture Centre in Abuja on October 24.

Security operatives on Saturday fired gunshots to disperse a crowd who were attempting to loot the Arts and Culture Center in Abuja.

The crowd claimed that the centre houses COVID-19 palliatives for the Federal Capital Territory.

In a video which has now gone viral, some were heard threatening to go through the back door if the entrance was not opened.

Shortly after, gunshots were fired as the crowd scampered for their safety.

This is coming amid the chaos, series of destruction and looting that has occurred in many parts of the country.

Major malls, shops, businesses and even vehicles have been burnt down – prisoners have escaped from jails, following what started as peaceful protests across the country, demanding an end to police brutality and extrajudicial killings, as well as better governance in the country.

The looting of warehouses first started in Lagos, part of an aftermath of shootings that occurred on Tuesday at the Lekki Toll Gate area of the state.

Scores broke into a warehouse in the Amuwo area of the state on Thursday, where COVID-19 palliatives were being stored.

Viral videos on social media showed people packing out bags and cartons of the palliatives which were ought to have been shared by government to cushion the negative impact of the COVID-19 pandemic on the economy.

Elated by their finds, many took to social media to share pictures and videos of the loot, as several others slammed the government for ‘hoarding for months’ what could have helped Nigerians cope through the hard times of the pandemic.

The same began to happen in many other states, with state governments coming out to say the palliatives were not hoarded but rather saved for vulnerable groups of the society.

Another Batch Of Nigerians From Ukraine Arrives In Abuja