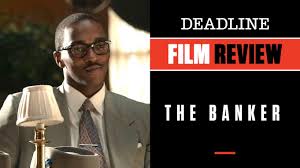 At first, “The Banker” seems as if it might be the kind of well-intentioned but hollow, ripped-from-real-life movie that’s less intriguing for its actual worth than for the circumstances around it.

What circumstances? Well, this is the first feature from Apple TV Plus, and will have a limited theatrical release on Friday, March 6, before moving to the streaming service on March 20. It’s about a relatively unknown chapter in the ’60s-era civil rights struggle.

Thanks to the three strong performances at its heart — especially that of a wisecracking Samuel L. Jackson (who’s also one of the producers) — “The Banker” often is as entertaining as it is enlightening. It’s “Hidden Figures” with redlining instead of rocket fuel.

The film begins in Texas in the early 20th century, where a young Bernard Garrett makes money shining shoes but has his eye on something much bigger. A whiz at math and fascinated by the real estate and banking conversations he overhears while working on the shoes of his businessmen customers, he vows to make good use of his talents. The first part of making that dream come true is getting out of the segregated South.

Fast-forward to Los Angeles many years later, and an adult Garrett (Anthony Mackie) arrives in town with his young wife, Eunice (Nia Long), and a dream of becoming a real estate king by buying properties and reselling them to a growing black middle class neglected by the white real estate industry. It’s in these early, rush-through-history moments that “The Banker” feels more like a Wikipedia entry than a film.

But once Jackson enters the picture as Joe Morris, a colorfully cantankerous club owner with money to invest in Bernard’s schemes, “The Banker” settles into a groove that comfortably marries message with movie. And their initial ploy is a big one: get a white friend, Matt Steiner (Nicholas Hault), to be the front for their business while they are the force behind the scenes. It’s their elaborate workaround to deal with California’s less in-your-face but still insidious brand of racism.

Despite some hiccups of intolerance, things go well enough in L.A. — including an alliance with a white real estate wheeler-dealer (Colm Meaney) — that Bernard makes enough money to hatch a plan to buy a bank back in Texas. By providing money and banking services to the black community there, he hopes to lift up his hometown.

It’s a life-changing decision that, according to the film, would lead to fundamental changes in both real estate and banking. It also lends the movie more needed conflict because the condensed version of Bernard’s story makes his life to that point appear a bit too easy.

Directed by George Nolfi from a script with five credited writers, the movie sometimes does come across as if it were made by committee. But it’s great to see an electric Jackson and a more straitlaced Mackie working together outside of the Marvel superhero universe, which is where we usually see them.