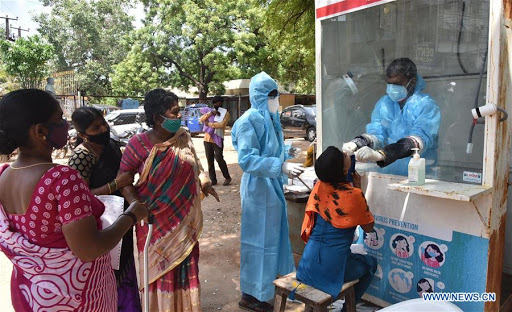 India reported its six millionth coronavirus case on Monday as it surged closer to the United States as the most-infected nation, and authorities pressed ahead with reigniting the economy.

The vast nation is home to 1.3 billion people, some of humanity’s most densely populated cities and a feeble health care system, and for several weeks it has reported around 90,000 new cases daily — the highest in the world.

Health ministry data showed a rise of 82,000 cases on Monday, taking the total to 6.1 million and closing the gap on the United States, which has recorded 7.1 million infections. India could leapfrog the US in the coming weeks.

India has a much lower death rate than other worst-hit nations with almost 100,000 fatalities so far — fewer than half the grisly toll of 205,000 recorded in the US, which has roughly a quarter of the population. Brazil has meanwhile recorded 140,000 deaths.

Prime Minister Narendra Modi has called on people to keep wearing face coverings when they ventured outside of their homes.

“These rules are weapons in the war against corona. They are potent tools to save the life of every citizen,” Modi said during his monthly radio address on Sunday.

The virus initially hit major metropolises including financial hub Mumbai and capital New Delhi, but has since spread to regional and rural areas where healthcare systems are even more fragile and patchy.

“In several of the pockets where the transmission is active, the infection has gone into the community,” former national health secretary Sujatha Rao told AFP.

“It is difficult to control transmission in such situations and a dramatic turnaround can perhaps be possible only through a rigorous implementation of a lockdown and preventive measures like mask wearing.”

The government is unlikely to reimpose major restrictions after a lockdown in March battered the economy and wrecked the livelihoods of millions of people, particularly the poor.

Some schools have now reopened, and trains, metros, domestic flights, markets and restaurants have been allowed to operate with some restrictions. The Taj Mahal also opened again for tourists this month.

Anand Krishnan, a community medicine professor at the All India Institute of Medical Sciences (AIIMS) in Delhi, said authorities should focus on treating people who contract the virus.

“The only thing that we can do is take care of people who are ill — identify them faster and treat them better. And follow the social-distancing norms,” he told AFP.

“Beyond that, I don’t think there is anything specific that can be done.”

Some locals in Delhi told AFP that while they remained cautious, their worries about the pandemic had lessened since the start of the year.

“The future is uncertain but one can only be cautious and follow all safety protocols.”

Himanshu Kainthola, 61, who recovered from the virus last month after testing positive with two other relatives, said his family’s fears “have reduced substantially”.

“We have made peace with it. We take the necessary precautions and invest in increasing our immunity rather than being anxious or scared of it.”

Creative writing student Santosh added that the virus was now “part of our lives”.

“You cannot shutdown every business, because the economy cannot collapse… Covid-19 is not going to pay the rent,” he said.