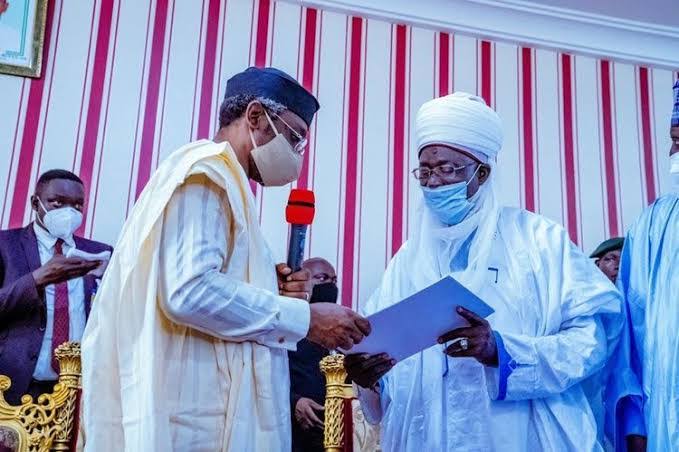 The Speaker of the House of Representatives, Rep. Femi Gbajabiamila, has paid a condolence visit to the Emir of Zazzau, Alhaji Nuhu Ahmed Bamalli, over the death of two prominent princes in the emirate.

The two personalities, Alhaji Bashir Aminu (the Iyan Zazzau), and the Talban Zazzau, Abdulkadir Iya-Pate, had died on Friday.

Gbajabiamila, who visited the emir’s palace in Zaria, Kaduna State, on Saturday, with a delegation of over 20 members of the House, including the House Leader, Rep. Alhassan Ado Doguwa, offered his sympathies to the Emirate Council and the immediate families of the deceased.

He also prayed to God to grant the souls of the late princes eternal rest.

The speaker, who had earlier commiserated with the emirate council through a condolence message he issued in Abuja prior to his visit, also seized the opportunity to congratulate Bamalli over his elevation to the throne.

He noted that though he did not physically attend the installation ceremonies, he was with the emirate in heart and soul.

Gbajabiamila stated, “I was here with my heart, with my soul. The only thing that was not here on that day was my body. May you grow over us your subjects, and that includes me, with wisdom and with fatherly love.

“Having said that, it is ironic that at the same time, I am coming to offer commiseration on the loss of two prominent members of your council. I only heard yesterday, then I was given the details this morning. What can we say? May Allah grant them eternal rest. May their souls rest in peace.”

The Speaker thanked the royal father for his support for the House of Representatives, particularly the 9th Assembly, and prayed that God would continue to guide the emir.

Gbajabiamila said his visit had three points rolled into one, noting that he was also in Zaria to celebrate with a member of the House, Rep. Abbas Tajudeen, who gave out his daughter in marriage and his son, who was taking a wife.

“We are here with other 20 members – a very large delegation – to pay homage before you, to rejoice with you, even in spite of what happened yesterday. Everything comes from Allah. He has done what He needs to do and we must be grateful and thankful to Him.”

Responding, the emir thanked the Speaker for the visit.

He said the entire emirate was in shock over the death of the two princes, though they submitted to the will of God.

He expressed the hope that the next time the Speaker would visit the emirate, it would be for full social interactions and not for condolences.

“We thank his Excellency for coming and we pray Allah to take you back home safely. Next time you will come not for condolences but for social visits”, the emir added.