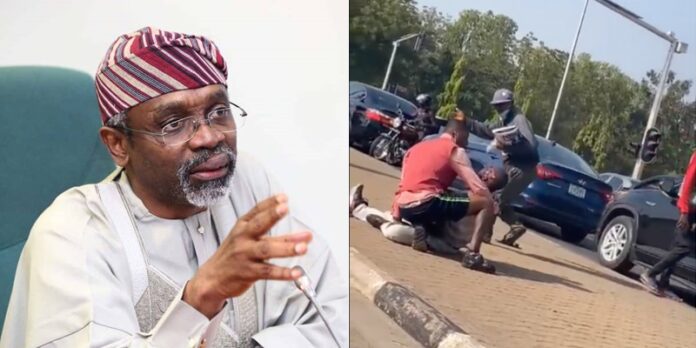 Members of Abuja Newspapers Distributors Association (ANDA) have vowed to stage a protest at the National Assembly and the police headquarters today over the killing of a vendor by a policeman in the convoy of Speaker of House Representatives, Femi Gbajabiamila.

President of ANDA, Benji Obute, told SaharaReporters that the wife of the slain newspaper vendor recently had a newborn baby and he was planning to have the naming ceremony for the baby on Saturday.

Obute said the speaker hurriedly stopped his convoy when he heard the sound of a gunshot and inquired from his security aides who responded that there was nothing.

He said that the speaker had handed over the sum of N9, 000 to the victim before the incident who happened to be their leader in the area as the traffic light passed the convoy.

One of the police officers in the backup vehicles reportedly shot the vendor in the head and fired other bullets in the air.

“We were together this morning, all of us discussing how the association will be represented at the naming ceremony of his baby because the wife just gave birth to a bouncing baby boy and the christening has been slated for Saturday,” Obute said.

“What happened was that at the Federal Secretariat, it has become a tradition that all those vendors hail those politicians. The traffic light there takes time before it will pass you. So, most of these politicians, when this traffic light holds them, will come close to them and be hailing them, and they used to give them money.”

“The Speaker has been giving them money and not only today. Today he gave them N9,000 before the incident. He brought out some money and handed it over to this boy, Ifeanyi, who was their leader. Immediately he collected the money the convoy moved.

But one of the overzealous police officers at the back of the convoy shot this young man and fired another bullet in the air.”

SaharaReporters gathered that the Divisional Police Officer at the Federal Secretariat mobilized some policemen to the scene shortly after the speaker’s convoy sped off.

He ordered them to rush the victim to the hospital where he was confirmed dead.

Obute said the speaker had not reached out to commiserate with them over the incident.

According to a statement by the vendors, all their members were urged to converge at Area 1 tomorrow today to start the protest.

They said no newspapers would be distributed tomorrow until after the protest.

The union appealed to media houses to cooperate with them to ensure that no paper is distributed, adding that any organization that violates the directive would be sanctioned.