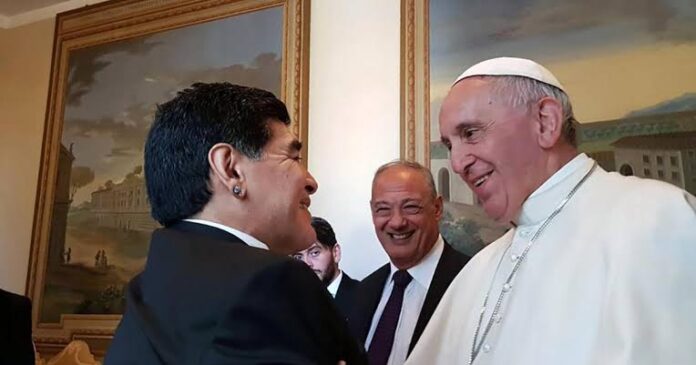 With a ball made from rags and surging adrenaline, the young Jorge Bergoglio and his friends pulled off “miracles” playing football in the street, Pope Francis recalled on Saturday.

Now 84, the Argentine pope remembered “the joy, the happiness on everyone’s faces,” after the 1946 victory of his Buenos Aires team, San Lorenzo, in a 31-page interview about sport published Saturday in Italy’s La Gazzetta dello Sport.

The first pope from Latin America called Diego Maradona a “poet” on the field, as he weighed in on the joys of sport.

Expounding on themes of hard work, sacrifice and camaraderie, Francis shared memories of the makeshift footballs that sufficed to exhilarate him and his boyhood friends.

“Leather cost too much and we were poor, rubber wasn’t used so much yet, but for us all we needed was a ball of rags to amuse ourselves and to create miracles, almost, playing in the little square near home,” Francis said.

Acknowledging he was “not among the best” of the footballers, Bergoglio played goalkeeper, which he characterised as a good school for learning how to respond to “dangers that could arrive from anywhere”.

The pontiff — described by the paper as “a pope of the people in the most noble sense of the term” — touched on the need for teamwork and working towards a shared goal.

“Either you play together, or you risk crashing. That’s how small groups, capable of staying united, succeed in taking down bigger teams incapable of working together,” he said.

The interview, which took place in early December at the Vatican, also saw the pope condemn doping in sport and stress the need to nurture talent through hard work.

“It’s not only a cheat, a shortcut that revokes dignity, but it’s also wanting to steal from God that spark which, through his mysterious ways, he gave to some in a special and greater form,” he said.

Francis called the Olympics “one of the highest forms of human ecumenism”, involving “sharing effort for a better world”.

– Fragile poet –
He recalled meeting Argentine footballer Maradona, who died in November, during a “match for peace” in Rome in 2014.

“On the field he was a poet, a great champion who brought joy to millions of people, in Argentina as well as Naples. He was also a very fragile man,” Francis said.

The pontiff said that after learning of Maradona’s death, he prayed for him and sent a rosary to his family with some words of comfort.

The pope, who has made inclusion of marginalised people one of the central themes of his papacy, shared his amazement and emotion at the accomplishments of the athletes who compete in the Paralympic Games, while expressing disappointment at “rich champions” turned “sluggish, almost bureaucrats of their sport.”

Sport, he said, was marked by the efforts of so many of those who, “with sweat on their brows” beat those born with “talent in their pockets”

“The poor thirst for redemption: give them a book, a pair of shoes, a ball and they show themselves capable of unimaginable achievements.”