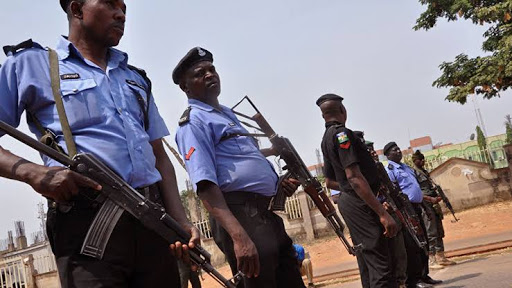 A mobile police officer shot a yet-to-be-identified woman in the mouth at Salvation bus-stop, Opebi area on Thursday.

In a video shared by a Twitter user @abba_kanselem, the bullet went through the young woman’s mouth, tearing her cheeks.

The victim was rushed to a nearby hospital by passersby and the Lagos State Emergency Management Agency (LASEMA).

Speaking on the matter, the police spokesperson, Olumuyiwa Adejobi, said the police were gathering information that will aid proper investigation.

Mr Adejobi said the policeman has been identified, but he was not in the Lagos command, although he works in Lagos State.

“He is a boyfriend to the lady victim. We will get him and update you. We guess they have a conflict that triggered the shooting.

“Policemen have been sent to the hospital to visit the lady and get some facts when she is stable,” he said.

The shooting is coming on the heels of several protests in Lagos against the brutality of Police and the operations of the Special Anti-Robbery Squad (SARS) in the state.

Several protests were held in different areas of Lagos on Thursday against the operations of SARS, calling for the police outfit to be scrapped.

The protesters marched around Lekki, Ikeja, the Lagos State House of Assembly and other key places in the state to call for the disbandment of the police unit.

The protesters stayed in front of the Lagos State House of Assembly till Friday, making their demands known.

Meanwhile, speaking in a programme on Channels Television on Friday, Frank Mba, the police force spokesperson said there are different people motivated by different reasons calling for an end to SARS.

Mr Mba said while some are genuinely concerned about the professional misconduct of SARS, others are beneficiaries of criminal enterprise such as those into organised crimes.

The police spokesperson had earlier said that the Police Force cannot scrap the unit but will rather get rid of the bad elements within the unit.

Protests against SARS will continue in Lagos and other states in Nigeria on Friday.

The Lagos State Police command on Friday, provided further clarifications on a shooting incident that occurred at Salvation bus stop, Opebi Lagos on Thursday, where a mobile police officer shot a lady in the mouth.

The incident occurred when a fierce argument arose between the lady and the officer, who are said to be in a relationship.

In a statement released by Mr Adejobi, the sergeant is attached to another police formation in Lagos State and not with the command.

The officer, who was identified as Eze Aiwansoba, was off duty and not issued a police rifle or arms at the time of the incident.

The police said they are worried about the possession of the arms the officer used in perpetrating the act.

“At about 9.21pm of Thursday, 8th October, 2020, one Joy Eze, f, of Owonikoko Street, Idiagbon, College Road, Ogba, Lagos, was shot at the mouth by a policeman, who was later identified to be one Sergeant Eze Aiwansoba ,m, attached to the Special Protection Unit, Base 16, Ikeja, Lagos State, after fierce argument between the duo who are in a relationship.

“As at the time of the incident, the identity of the policeman was unknown, until the Commissioner of Police, Lagos State, CP Hakeem Odumosu, ordered the Divisional Police Officer, Ikeja, to trace the whereabout of the victim, ascertain her health condition and get more information on the incident and identify the policeman for further necessary actions.

“Based on the preliminary investigation, the said police sergeant was off duty and not issued with a police rifle or arms as at the time of the incident, hence the Police’s concern on the ownership and/or possession of the arms he used in perpetrating the act.

“The Commissioner of Police has ordered that the fleeing policeman, who is attached to another police formation within the state, be arrested by all means and made to face the consequences of his criminal act,” Mr. Adejobi wrote.

Condemning the shooting by the police officer, the Lagos Police Command said the shooting incident was not in any way connected to the ongoing #endsars# protest in the state.

“The command will not in any way leave any stone unturned in getting justice for the victim and sustain the ethics and Standard Operating Procedure of the Nigeria Police Force; and protect the fundamental human rights of all and sundry across the state,” Mr Adejobi said.

The Commissioner of Police in the state, Hakeem Odumosu appealed to all Lagosians, especially protesters across the state, to maintain law and order while they embark on peaceful protests as the police will do everything possible not to infringe on their rights.