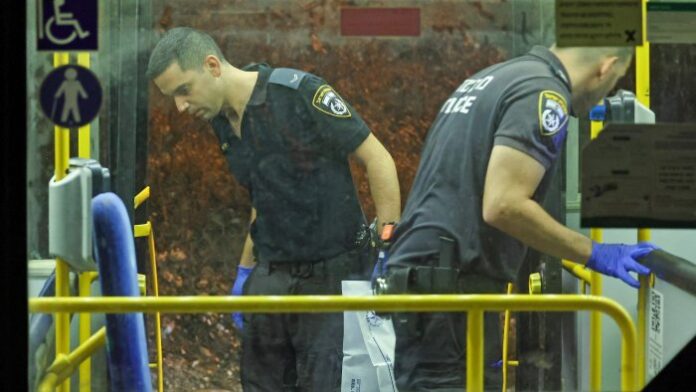 Israeli police Sunday arrested a suspect in a pre-dawn shooting spree targeting a bus just outside Jerusalem’s Old City that wounded eight people, including a pregnant woman and several US citizens.

“The terrorist is in our hands,” police spokesman Kan Eli Levy told Israeli public radio hours after the bloody attack not far from the Western Wall, the holiest prayer site for Jews.

Several American citizens were among the wounded, said the US embassy, which declared that “we are shocked and saddened by the terrorist attack” but gave no further details on the victims, citing privacy concerns.

The gunman started spraying bullets at the public bus and people on the street in the attack at the Tomb of David bus stop near the Old City’s Zion Gate, recounted bus driver Daniel Kanievsky.

“I was coming from the Western Wall. The bus was full of passengers,” he told reporters in front of his bullet-riddled vehicle.

“I stopped at the station of the Tomb of David. At this moment, the shooting started. I saw two people outside falling, two inside were bleeding. Everybody panicked.”

One of the wounded was a pregnant woman, whose baby was delivered by Caesarean section after the attack, a spokesman at Jerusalem’s Shaarei Tsedek Hospital told AFP.

“She remains intubated and in serious condition,” he said. “The infant was delivered and is in serious but stable condition.”

Local media reported a US Jewish family of four who had been waiting for a taxi were among the casualties.

The US embassy said that “we can confirm that US citizens were among the victims. We are gathering further information. Due to privacy concerns, we will have no further comment.”

Following an hours-long manhunt, police said a suspect had turned himself in. They also published a picture of the handgun he had allegedly used.

Prime Minister Yair Lapid told his cabinet meeting that “this is a lone assailant, a resident of the city with a criminal record”.

Lapid had earlier warned in a statement that “all those who seek us harm should know that they will pay a price for any harm to our civilians.”

“We were on the scene very quickly” on Ma’ale Hashalom Street, its medics said in a statement.

“We saw a passenger bus … in the middle of the road. Bystanders called us to treat two males around 30 years old who were on the bus with gunshot wounds.”

The Palestinian militant Islamist group Hamas, which controls the Gaza Strip, hailed a “heroic operation” without claiming responsibility for the attack.

“Our people will continue to resist and fight the occupier by all means,” it said in a statement.

The shooting came a week after the end of a three-day conflict between Israel and Islamic Jihad militants in the densely populated Palestinian coastal enclave of Gaza.

At least 49 Palestinians, including Islamic Jihad fighters and a number of children, died in the violence which ended last Sunday after Egypt negotiated a truce. Since March, 19 people — mostly Israeli civilians inside Israel — have been killed in attacks, mostly by Palestinians. Three Israeli Arab attackers were also killed.

In the aftermath of those attacks, Israeli security forces stepped up raids in the occupied West Bank.

More than 50 Palestinians have been killed, including fighters and civilians, in operations and incidents in the West Bank since then.