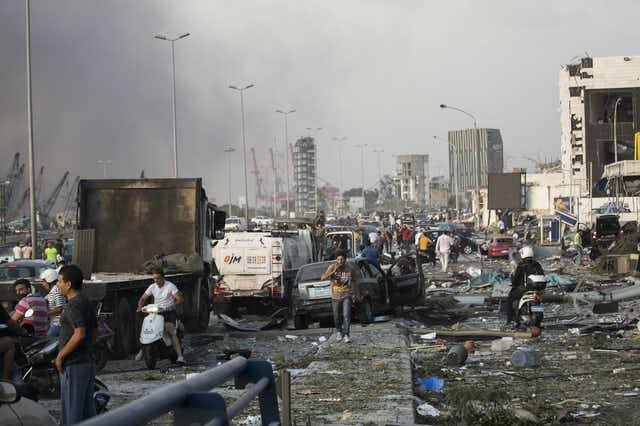 Lebanon explosion rocks capital city Beirut What you need to know
At least 78 people were killed and 4,000 wounded in a massive explosion that shook the Lebanese capital, Beirut, on Tuesday, Lebanon’s health minister told Reuters.

It’s still unclear what exactly caused the explosion, centered on the city’s port area. It was earlier blamed on a fire that broke out.
Lebanon’s Prime Minister said an investigation would focus on an estimated 2,750 tons of the explosive ammonium nitrate, stored at a warehouse for six years.
One witness said the blast felt like an earthquake, while another witness said she had never felt an explosion like it in the city.

More countries in Latin America are sending their condolences to the Beirut explosion victims and relatives.
The region is home to a large diaspora of Lebanese expatriates and people of Lebanese descent.

Brazilian President Jair Bolsonaro said on his official Twitter account Tuesday evening that he is “deeply saddened by the scenes of the explosion in Beirut. Brazil is home to the largest community of Lebanese in the world and, therefore, we feel this tragedy as if it were in our territory. I express my solidarity with the families of the fatal victims and the wounded.”

Mexico’s President Andres Manuel Lopez Obrador said Tuesday evening on his official Twitter account: “Sad and unfortunate the situation in Beirut, Lebanon. Our condolences to the families of the victims and to the entire sister nation.”

Panama’s Foreign Ministry tweeted: “The National Government expresses its deep dismay at the terrible explosion that occurred in Beirut, while expressing its solidarity with the Republic and the People of Lebanon and expressing its condolences to the families of the deceased and injured.”

And Ecuador’s Foreign Ministry said: “Ecuador stands in solidarity with the Republic of Lebanon in light of the explosions registered in its capital, Beirut. @CancilleriaEc expresses its condolences to the families of the deceased.” The ministry said 150 Ecuadorians reside in Lebanon and “so far there are no victims.”

Tony May, a former explosives investigator for the US Department of Alcohol, Tobacco and Firearms, told CNN that video of the blast in Beirut offers important clues to what happened.

“I’ve done a lot of accident investigations with the government, both national and international, and it is clear to me that this was a large amount of explosives or energetic material stored in a building that caught fire and that fire propagated to the explosives, causing the accident,” said May, who now works as a security and explosives consultant.

White flashes: The white flashes seen in different parts of the video may indicate that smaller explosions were occurring in the lead-up to the large shockwave, May said.

What it was like in CNN’s Beirut bureau when the blast hit
From CNN’s Ben Wedeman in Beirut, Lebanon
It’s an earthquake, I thought, as the CNN bureau in central Beirut shook Tuesday with a violence I’d never felt before. I crouched down on the floor, waiting for more tremors.

A split second later, I heard glass shatter and the crunch of metal. Peering through the window, I saw a cloud of yellow dust coming toward me, the street strewn with rubble and broken glass. People were running around and shouting, trying to understand what had happened.
I stumbled around the rest of the bureau. A window frame had been torn from the wall. The studio was a jumble of equipment, cables were scattered all over, but the tripod with its camera was still in place on the floor.

The bureau’s glass entrance, with its big, red CNN logo, lay shattered in the corridor.

A few minutes later, a doorman named Mustafa, a lanky, normally good-spirited chap, came running in. “Are you ok?” he shouted. “Is everyone fine?”

“I’m fine,” I responded. Nothing had happened to me.

One Japanese national was injured in the Beirut blast. South Korea says its embassy sustained minor damage
A Japanese citizen suffered a minor injury during the explosion in Beirut Tuesday, Japanese Chief Cabinet Secretary Yoshihide Suga said at a news conference on Wednesday.

Suga offered his condolences to the victims of the blast and said that the injured individual is believed to be the only Japanese casualty.

In South Korea: The country’s Ministry of Foreign Affairs said in a statement that it has not received any reports of South Korean victims.
“Immediately after the incident, the South Korean Embassy in Lebanon checked on the well being of our citizens using local Korean group chat. There has been no report of casualties. The Embassy is cooperating with the government of Lebanon to take necessary measures to protect our citizens,” the statement says.

The ministry said the South Korean Embassy in Beirut, which is about 10 km (6 miles) from the blast site, was not seriously affected by the explosion. Only two glass window panes from the fourth floor of the building were damaged.

Trump offered sympathy and assistance to the people of Lebanon Tuesday after the explosions, which left dozens dead and thousands injured, referring to the incident as a “terrible attack.”

US Secretary of State Mike Pompeo said on Tuesday that the government of Lebanon is investigating the cause of the explosion and the US looks forward to that outcome.

What we know so far: Initial reports blamed the explosion on a major fire at a warehouse for firecrackers near the port, according to Lebanese state news agency NNA.
Lebanon’s Prime Minister, Hassan Diab, later said that 2,750 tons of ammonium nitrate, a highly explosive material used in fertilizers and bombs, had been stored for six years at a port warehouse without safety measures, “endangering the safety of citizens,” according to a statement.

The Prime Minister called the storage of the material “unacceptable” and called for an investigation into the cause of the blast, with the results released within five days, the statement said.

Lebanese officials have not called the explosion an attack.

The Emir of Qatar, Tamim Bin Hamad Al Thani, said on Twitter that he spoke on the phone with Lebanese President Michel Aoun “to express Qatar’s standing with the brothers in Lebanon and its willingness to provide immediate support following the explosion.”

“Our condolences go out to the Lebanese people, and we pray to God that the victims be blessed with mercy and heal the wounded,” he said.
Kuwait’s Crown Prince Sheikh Nawaf Al-Ahmad Al-Jaber Al-Sabah has also directed authorities in the country to send urgent medical assistance to Lebanon, according to a statement by his court reported by Kuwait News Agency (KUNA).

Lebanon is in the middle of an economic crisis.
The blast that rocked the Lebanese capital of Beirut hit the country at an already harrowing time.

Lebanon has been dealing with sporadic anti-government protests since late last year, when a popular uprising gripped the country. Many were angry with the country’s ruling political class and endemic corruption. In October, protests erupted against a swath of new austerity measures — including a proposed a tax on WhatsApp calls.
The ensuing unrest forced former Prime Minister Saad Hariri to resign, but did not solve the underlying issues.

Lebanon’s economy, like many others around the world, was brought to a screeching halt by a government-imposed lockdown designed to stop the spread of Covid-19. Though Lebanon has only confirmed 5,062 cases of Covid-19 and 65 virus related deaths, according to data from Johns Hopkins University, pandemic-related restrictions have further exacerbated the country’s deep and long-running financial crisis.
Lebanon defaulted on its debt for the first time, causing food prices to soar and the Lebanese lira to plummet.

Prior to the Covid-19 outbreak, the World Bank projected that 45% of people in Lebanon would be below the poverty line in 2020. Now, the government believes that up to 75% of people are in need of aid, Social Affairs Minister Ramzi Musharrafieh told news agencies.

We are hungry,” came the resounding cries from angry protesters as they faced off with security forces during demonstrations that swept through Lebanon’s major cities this spring.

It’s just past 4 a.m. in Beirut. Here’s what we know so far about the blast that rocked the city

A large explosion rocked the Lebanese capital of Beirut on Tuesday at 6:07 p.m. after a major fire broke out near the city’s port, killing at least 78 people and injuring 4,000.

What caused the blast: Initially, there were conflicting reports on what caused the explosion. It was earlier blamed on a major fire at a warehouse for firecrackers near the port.
Lebanon’s Prime Minister Hassan Diab later said in a statement that an estimated 2,750 tons of ammonium nitrate, an explosive, had been stored at a warehouse for the past six years. Lebanon’s general security chief said the substance had been confiscated years ago.

What’s it like on the ground: In a word, apocalyptic. The blast tore through the city and wreaked havoc on nearly all of Beirut’s quarters. The shockwave from the explosion was visible in footage of the incident.
Buildings as far away as 10 km (6 miles) from the site of the explosion were damaged. Streets were filled with shattered glass.

Emergency wards were inundated with the injured, while the Lebanese Red Cross implored the public on Twitter for blood donations to help the wounded. One of Beirut’s major hospitals, Hotel Dieu, received around 400 injured patients.

What’s the government doing: Lebanese President Michel Aoun ordered military patrols in the city and vowed to investigate. Prime Minister Diab said the storage of ammonium nitrate at a warehouse was “unacceptable” and would be investigated.
“I will not rest until we find those responsible for what happened, hold them accountable, and impose maximum punishment,” he said.

Thousands of tons of ammonium nitrate were stored at a Beirut warehouse for 6 years, Prime Minister says

Lebanese Prime Minister Hassan Diab said that an estimated 2,750 tons of ammonium nitrate had been stored at a warehouse in Beirut for six years, according to a statement published on the Republic of Lebanon Presidency website.

Ammonium nitrate is a key ingredient in both fertilizer and certain types of explosives. The substance has been used in terror attacks, including the bombing of the Alfred P. Murrah Federal Building in Oklahoma City in 1995.

It’s still unclear what exactly caused the Tuesday explosion in Beirut that killed nearly 80 people. The blast was earlier blamed on a fire that broke out.

Lebanon’s General Security Chief Abbas Ibrahim said earlier “highly explosive material” that had been confiscated years ago was being stored in the warehouse, which is just minutes’ walk from popular shopping and nightlife districts.

Prime Minister Diab said in the statement it was “unacceptable” that so much explosive material was stored in a warehouse “without taking preventive measures while endangering the safety of citizens.”

“I will not rest until we find those responsible for what happened, hold them accountable, and impose maximum punishment,” he said.
Diab gave his condolences and wished for the speedy recovery of the wounded. He called for the formation of an investigation committee into the cause of the blast, which should release its results within a maximum of five days, added the statement. 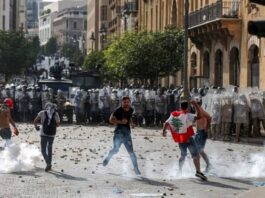 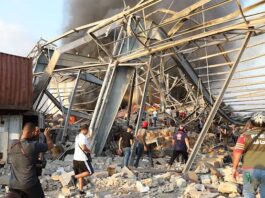