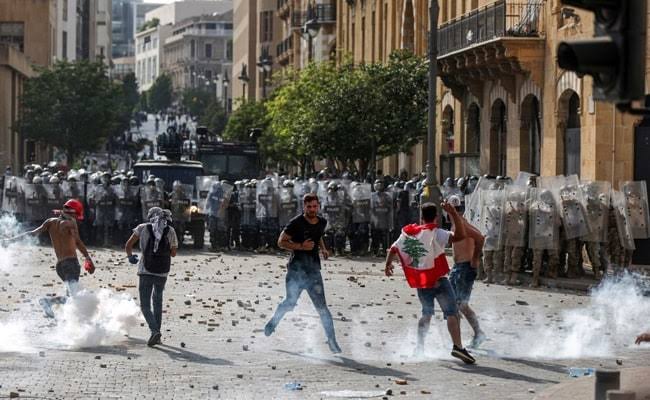 Lebanese protesters stormed the foreign ministry in Beirut on Saturday as anger exploded over a deadly blast that made hundreds of thousands homeless and shocked the world.

Thousands of demonstrators, some of them brandishing nooses, had descended on the city centre to vent their fury at politicians they blame for Tuesday’s explosion, which levelled Beirut port and killed 158 people.

As security forces fired tear gas to disperse strone-throwing demonstrators, Prime Minister Hassan Diab said he would seek early elections, saying it was the only way to “exit the country’s structural crisis”.

Demonstrators marched through streets ravaged by the blast, gathering in the central Martyrs’ Square, where a truck was on fire.

The police said an officer had fallen to his death after an “assault” by “a number of murderous rioters” during the protests.

“A member of the Internal Security Forces died while…. helping people trapped inside the Le Gray hotel” in downtown Beirut, the police force said on Twitter, without providing additional details.

That came after a group led by retired Lebanese army officers stormed the foreign ministry and declared it the “headquarters of the revolution”.

“We are taking over the foreign ministry as a seat of the revolution,” Sami Rammah, a retired officer, announced by loudspeaker from the ministry’s front steps.

“We call on all the anguished Lebanese people to take to the streets to demand the prosecution of all the corrupt,” he said, appealing to the international community to boycott the government.

In an apparently coordinated strategy, others stormed the headquarters of the country’s banking association, a focal point of anger during recent mass protests over corruption and Lebanon’s collapsing economy.

They were later chased out by security forces who entered via a back door and doused the fire.

A group also briefly entered the economy ministry, scattering piles of documents in the street.

The Lebanese Red Cross said it had taken 63 people from the protest to nearby hospitals and treated another 175 at the scene, without specifying who they were.

As rescuers made last-ditch attempts to find survivors amid the rubble, efforts were afoot to drum up international support for the disaster-hit country ahead of a virtual aid conference on Sunday.

A fire at the port on Tuesday ignited a stock of ammonium nitrate, triggering an explosion that was felt as far away as Cyprus, and destroyed entire neighbourhoods and wounded at least 6,000.

It was widely perceived as a direct consequence of corruption and incompetence, perhaps the most egregious case of callousness on the part of Lebanon’s long-reviled elite.

‘Criminals’
“You were corrupt, now you are criminals,” read one banner at the demonstration, while protesters chanted: “Revenge, until this regime reaches an end.”

Rita, whose home was gutted by the blast, said: “They have robbed us of everything. We have nothing left: no dreams, no future… no dignity, no money, and now, no houses.”

“We should not be forced to live this way,” added the 33-year-old protester.

The health ministry said 158 people were confirmed to have died in the disaster, while 21 were still missing.

The Netherlands announced that its ambassador’s wife was among the dead.

The blast has prompted an impressive aid response from both inside and outside Lebanon, but demonstrators’ chants and the mock gallows they set up in the street made it clear that people want heads to roll.

But some of Lebanon’s leaders seemed to consider the outpouring of international solidarity as an opportunity to break the government’s diplomatic isolation.

Foreign support
Lebanon defaulted on its debt for the first time ever this year and the current leadership has so far failed to address the economic emergency and agree on the reforms needed to negotiate an international rescue package, despite intense Western pressure.

Speaking on Friday evening, Aoun said “the explosion has led to the lifting of the isolation”.

Hassan Nasrallah, the chief of powerful Shiite movement Hezbollah, said the disaster had created “an opportunity” to get the world to work with Lebanon again.

Three senior diplomats were in Beirut Saturday in a show of solidarity with the disaster-hit city, where 300,000 people were made temporarily homeless by the port explosion.

High-stakes probe
So far 21 people have been detained over the blast, including Badri Daher, director-general of Lebanon’s customs authority.

But Aoun has rejected calls backed by Macron for an international, independent investigation into the blast.

Five lawmakers have quit since the blast.

Few Lebanese seemed to have any trust that the leadership would incriminate its own in an investigation chaired by senior officials.

“The fear is that the authorities will benefit from this great disaster and from the international and Arab attention they are getting,” he said.