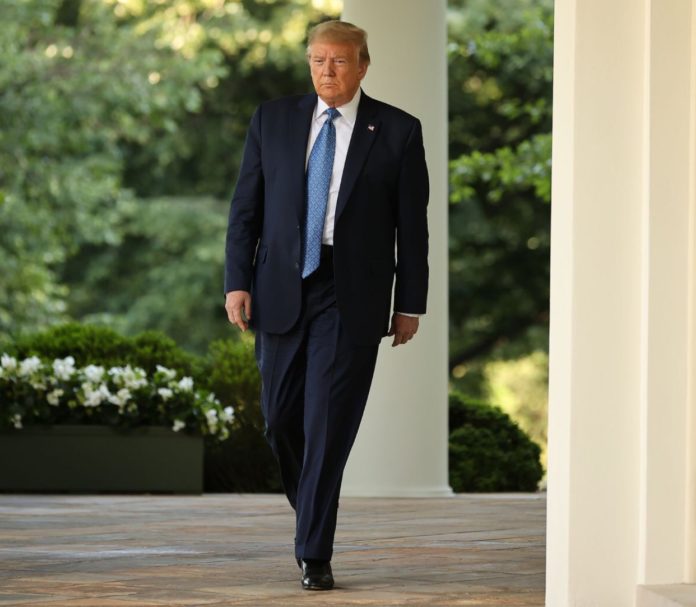 President Donald Trump on Monday threatened to invoke the Insurrection Act — a centuries-old law that gives the president the authority to send the US military into US cities and towns to quash domestic unrest — if state governors don’t take sufficient action to quell the ongoing protests and unrest happening in cities across the country.

“If a city or state refuses to take the actions that are necessary to defend the life and property of their residents, then I will deploy United States military and quickly solve the problem for them,” Trump said in a short speech delivered from the White House Rose Garden.

As he spoke, loud booms could be sporadically heard in the background as law enforcement officers fired tear gas and rubber bullets at peaceful protesters who had gathered near the White House.

For the past three days, Trump has flirted with sending troops into cities around the country to put down the protests and unrest sparked by the death of George Floyd, a 46-year-old black man who was killed last week when a Minneapolis police officer used his knee to pin Floyd’s neck to the ground for several minutes while he was handcuffed.

On Saturday, Trump tweeted, “Liberal Governors and Mayors must get MUCH tougher or the Federal Government will step in and do what has to be done, and that includes using the unlimited power of our Military and many arrests.”

Two days later, he tweeted that Republican Sen. Tom Cotton was “100% Correct” for suggesting violent activists would cower before a US Army presence.

As of Monday, 23 states and the District of Columbia had mobilized thousands of National Guard members to support police officers and firefighters with trying to control the demonstrations and unrest.

Trump, however, is unsatisfied with those efforts. In a private call with governors on Monday, he told them, “If you don’t dominate, you’re wasting your time,” adding that “we have a wonderful military.” Hours later, White House press secretary Kayleigh McEnany said the president would soon send “federal assets” around the nation, and mentioned the Insurrection Act as a possibility.

“The Insurrection Act, it’s one of the tools available, whether the president decides to pursue that, that’s his prerogative,“ she said.

However, Trump did say US military police, many of whom have spent part of the past two decades in the Middle East, will deploy to Washington, DC. Importantly, they still don’t have the authority to perform law enforcement duties.

But if Trump were to go through with invoking the Insurrection Act, experts say it would be one of the most dramatic law enforcement escalations in decades, certain to inflame tensions between the demonstrators and their government instead of lower them.

An active-duty US Air Force officer who flew warplanes in Afghanistan told me such a decision isn’t wise. “These protests aren’t combat and shouldn’t be viewed through the same prism,” the officer said, speaking on the condition of anonymity to talk candidly about a sensitive issue. “Expecting a military response is myopic on the part of the administration, tone-deaf in light of yet another intolerable and unacceptable killing, and a misuse of the military.”

But Trump hasn’t heeded that advice. Instead, he’s leaning away from it.

Trump absolutely can send American troops to any part of the United States to deal with the protests. He is the commander in chief, after all. But if he wants them to be able to search, seize assets, and arrest protesters and people who are looting, there are a few legalistic hoops he’ll have to jump through first.

You might have heard of “posse comitatus,” a longstanding law that bars the US military in most cases from being used to enforce domestic law. However, there is actually a way for federal troops to perform law enforcement functions. Simply put, they have to get special, statutory authorization to allow them to do those duties.

By far the most important of those authorizations — and the one most likely to come into play in this situation — is the Insurrection Act.

“This is the legal key that unlocks the door to use federal military forces … to quell civil unrest,” Mark Nevitt, a military law expert at the US Naval Academy, wrote for the Just Security website last Friday.

Nevitt noted two main ways the Insurrection Act could be invoked for the protests. It’s worth going through each in turn.

1) Local leaders could ask the president for US military assistance

A state’s legislature or its governor could directly request US military support. This actually happened in 1992: California Gov. Pete Wilson sought assistance from President George H.W. Bush during the Los Angeles protests that erupted after a jury acquitted police officers charged with arresting and beating Rodney King. In response, Bush put California National Guard members under federal command and sent in soldiers and Marines already based in the state.

It’s unclear if any governor would actually make such a request of Trump right now. Experts told me governors typically shy away from taking this step because of how controversial it is. Plus, they have National Guard members already under their command who, when authorized, can perform law enforcement functions.

Reports, however, indicate that active-duty troops stationed around the country are on high alert to deploy within 24 hours. “We have our military ready, willing and able, if they ever want to call our military,” Trump told reporters on Saturday. “And we can have troops on the ground very quickly if they ever want our military.”

Trump could invoke the law to send troops even without a state legislature’s or governor’s consent — but there’s a catch.

Trump can only deploy troops within the US “for certain purposes,” Lindsay Cohn, a US military expert at the Naval War College, told me. “Technically and legally, he can send them to protect federal property or enforce federal law.”

Past presidents used this authority to defend civil rights in the 1950s and ’60s.

Five years later, President John F. Kennedy sent Army soldiers into Oxford, Mississippi, after the state’s governor tried to block a black student from attending the University of Mississippi in Oxford (often referred to as Ole Miss). This allowed the student, James Meredith, to register safely even though a mob tried to stop him.

In both the Eisenhower and Kennedy cases, the president used federal troops to enforce federal laws. That’s important, Cohn told me, because the key is that those and other deployments by presidents were to suppress insurrections against US federal laws — not laws of the individual states.

Importantly, to invoke the act, Trump must first — with the attorney general’s help — issue a “proclamation to disperse.” Basically, he has to give the people working against federal law a bit of time to stop their actions. If they don’t, the president is free to send in the US military.

If Trump were to do this, it would be guaranteed to anger a lot of people, and many would likely contend that Trump is behaving in an authoritarian manner, using the might of the US military to crack down on protesters. But while the impulse behind it may seem undemocratic, that doesn’t necessarily mean it wouldn’t be legal.

“It’s not implausible to argue that these statutes could apply now,” Steve Vladeck, a national security law expert at the University of Texas Austin, tweeted on Saturday. “And it’s hard to imagine courts second-guessing factual determinations by the President that circumstances warrant use of the military to restore order.”

This makes the future of the protests Trump’s responsibility

If Trump wants soldiers and Marines to go into American cities and start shooting, he’ll be wildly disappointed.

As Nevitt explained, there are clear and severe restraints on active-duty troops using force while performing policing duties at home, even under the Insurrection Act

To be clear, that could apply in some instances, but obviously not in the majority of them. Which means that the US military will serve mainly as more manpower.

The move isn’t without some risk for Trump, either. As Vladeck tweeted, is that sending in American troops puts the onus for ending the protests on Trump.

“If Trump invokes these statutes, he’d own all that follows,” he wrote on Saturday.

Mayors and governors, then, wouldn’t take the credit or the blame for whatever happened next — Trump would.