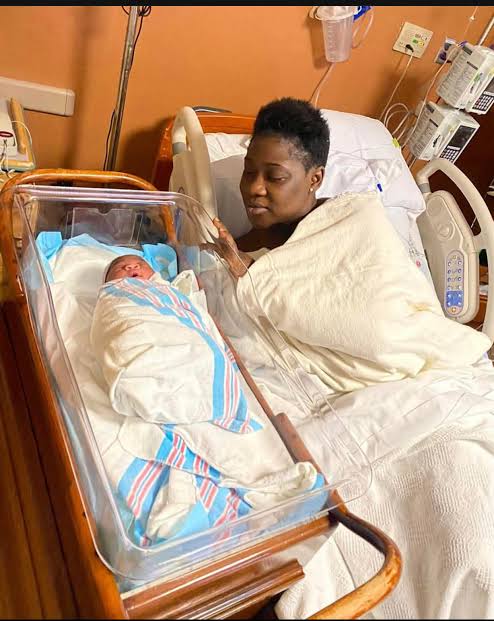 A number of Nigerian celebrities have been welcoming their babies all year long, from Regina Daniels to Simi, Halima Abubakar, and even Zlatan. Here, we present the list of 23 Nigerian celebrity babies of 2020

The 21-year-old new mum bore her baby days after she had a surprise baby shower. The all-white event which took place in Abuja was organised by her friends with the help of her hubby.

Simi, 31, shared the news on Instagram on Sunday and revealed that they had named her Adejare. The couple tied the knots at a private ceremony in Lagos, in December 2019.

Simi’s pregnancy was confirmed when she debuted her baby bump in the video for her song, ‘Duduke’. The track was released on her birthday, April 19.

Nollywood star, Mercy Johnson and husband, Prince Okojie, welcomed their fourth child, a daughter, in the United States, on May 4. The couple are already parents to a son and two daughters.

The baby was born at the University of Maryland St. Joseph Medical Center. The couple had an elaborate wedding in Lagos in 2011.

Actress Halima Abubakar announced the arrival of her bundle of joy on April 3. Halima first hinted about being pregnant in November 2019 when she said she is expecting a “Lil Minnie”. The father of the child remains unknown.

YBNL’s DJ Enimoney and his girlfriend welcomed a baby girl on July 16. The artist, who is the younger brother of indigenous rapper Olamide, shared the news on Instagram saying “Ahliamdulilah, it’s a girl. Anina,”

BBNaija’s Nina and her US-based husband, Tony, announced the birth of their son on July 13.

The excited father is the one who took to Instagram to share the news of their baby’s arrival. The couple held their traditional wedding ceremony that took place on February 15 in Nina’s hometown in Imo state.

Nigerian singer, Kcee and his wife, Ijeoma, welcomed his third child with his wife on May 12. The couple wedded in 2010 months after an elaborate Dubai proposal.

BBNaija stars, Tope Adenibuyan aka Teddy A and Bamike Olawunmi aka BamBam, welcomed their daughter on March 5.

Bambam welcomed the baby four months after their star-studded Dubai wedding. The lovebirds began their relationship while still in the BBNaija house.

Nollywood actor, Junior Pope, and his wife Jennifer Awele welcomed their third child, a boy, on October 27. The newborn has been named Jamon Adimchinobi Odonwodo, his dad announced.

DJ Xclusive and his heartthrob, Tinuke Ogundero, welcomed a baby girl on September 2. The couple got married on October 1, 2015.

Nollywood actor, Browny Igboegwu, and his wife welcomed their first child on June 16. They had been married for 10 years.

Popular Yoruba actress, Yewande Adekoya, welcomed a baby girl on April 17. The actress, who is popularly called Ednawey, has been married to actor and movie producer, Abiodun Thomas, for seven years

The former Miss World, Agbani Darego, welcomed her second child on December 4. She tied the knots with Ishaya, son of a retired general, Theophilus Danjuma, at a private wedding held at the Amanjena Luxury Resort in Marrakech, Morocco, on April 8, 2017.

Popular Yoruba movie actor, Razaq Owooniran, popularly known as Wazo, and wife, announced the birth of their son on May 19 on their Instagram pages. The couple tied the knots at Moreta event center, Ikotun Lagos on September 4, 2018.

Timaya announced the arrival of his daughter with his third baby mama, a Nigerian-American visual artist, Dunnie O, on November 17, 2020. This is despite welcoming the child in February.

Nigerian Singer Lyta and his girlfriend, Coco Brown, welcomed a son on July 24.

Nigerian rapper Olanrewaju Ogunmefun popularly known as Vector and his partner welcomed their baby on Wednesday. The rapper broke the news on Monday. The rapper also has a daughter from a previous relationship.

Nigerian singer-songwriter and dancer Omoniyi Temidayo Raphael, known professionally as Zlatan, and girlfriend, Seyi Awonuga, welcomed their son on May 27.

Popular Nigerian actor Sean Jimoh and his wife welcomed a baby girl on May 22 at a hospital in the United States of America. The actor and his wife, Olatokumbo, became proud second-time parents.

Yoruba actor, Baba Tee, welcomed a baby boy with his third wife on June 24. The 40-year-old made this known when he shared a photo of himself kissing his wife’s baby bump while wishing himself a happy Father’s Day.