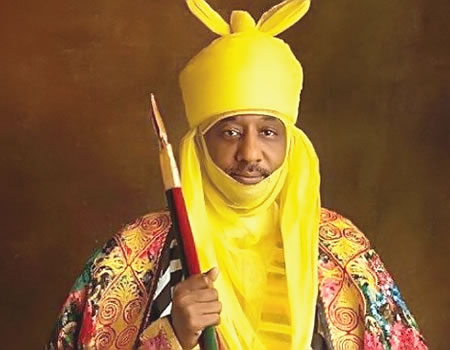 The Secretary to the State Government, Usman Alhaji while making the announcement on Monday said the removal was in line with the recommendation of the Kano State Public Complaint and Anti-Corruption Commission which summoned the Emir.

The state government according to a report by AFP was also to safeguard the “sanctity, culture, tradition, religion and prestige” of the Kano state emirate established over a millennium ago.

Sanusi was also accused by the state government of “disrespect to lawful instructions.”

Here are seven things you should know about him:

1. The position of the emir of Kano is by tradition the second most senior Islamic ruler in Nigeria, after the sultan of Sokoto.

3. In 1963 Sanusi’s grandfather, Muhammadu Sanusi 1 was dethroned by the then northern regional government over insubordination. He was the 11th Emir of Kano from 1953 to 1963. Riots broke out in Kano, following this removal.

4. Lamido Sanusi has been at loggerheads with state governor Abdullahi Ganduje because of his outspokenness against the authorities and allegations that he supported the opposition at last year’s elections.

5. Sanusi, before his ascension to the throne as the Emir of Kano was a banker and economist. He was the former governor of the Central Bank of Nigeria (CBN).

6. In his earlier role as central bank chief, Sanusi earned a reputation as a straight-talking moderniser, not afraid to speak out against corruption, although he faced — and denied — accusations of graft himself.

7. He was sacked from the position of CBN governor in February 2014 after he accused the state-run Nigerian National Petroleum Corporation of not remitting some $20 billion to state coffers.