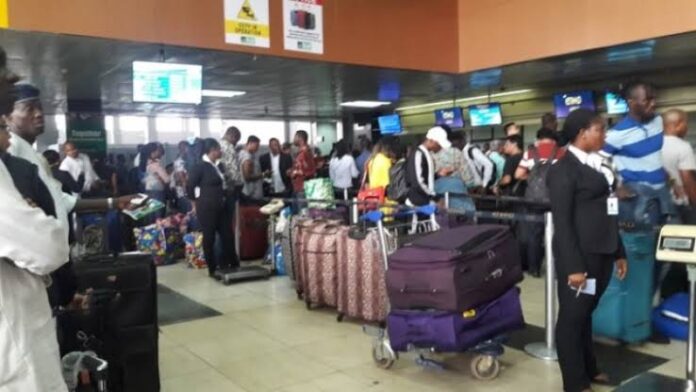 The cancelation of scheduled flights from the airport followed the unexpected imposition of a 24-hour curfew.

Hundreds of passengers who were scheduled to travel from the Murtala Muhammed International Airport, Lagos, to various destinations across the country on Tuesday were stranded as operating airlines announced the cancelation of flights.

The cancelation of scheduled flights from the airport followed the unexpected imposition of a 24-hour curfew by the Lagos State government.

The curfew announced by the state governor, Babajide Sanwo-Olu, followed the escalation of the protests around the state, as the #EndSARS protest by youth appeared to have been hijacked by hoodlums.

Confrontation between the hoodlums and security operatives in some parts of the state degenerated into coordinated attacks on some police stations.

The state government imposed curfew in all parts of the state from 4 p.m. on Tuesday.

During the period of the curfew, the governor said nobody, except essential service providers and first responders, should be found on the streets

Following the announcement, there was stampede and confusion in the state, as residents made frantic efforts to hurry home to beat the deadline for the curfew to commence.

At the airport, all outbound flights scheduled to depart after 4 p.m. on Tuesday from Lagos to all parts of the country were immediately cancelled by their respective airlines.

Some of the passengers billed to travel with the affected flights, who were already at the airport when news of the imposition of the curfew broke, were stranded, as there were no visible alternatives available.

The situation is also affecting the flight schedules for Wednesday, as all airlines late on Tuesday announced the cancellation of those flights.

One of those cancellations was by the management of Air Peace, which expressed regrets over the development.

“Dear Esteemed Passenger, we apologise for the disruption to your travel which is due to CURFEW. Your flight 7130 LAGOS to ABUJA for tomorrow 21ST October, 2020 will NO LONGER OPERATE.

5G Launches In US Without Huge Impact On Flights.