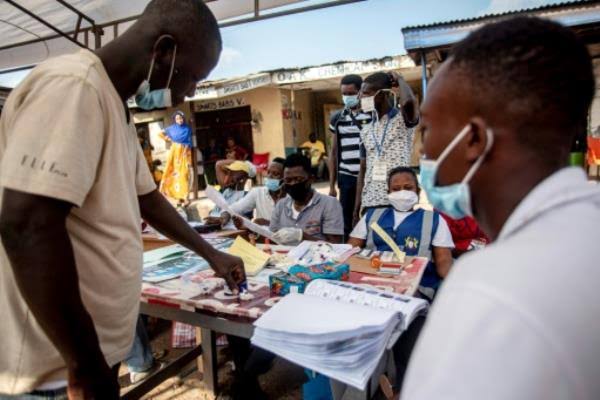 Ghanaians voted Monday in an election seen as a close fight between President Nana Akufo-Addo and his longtime rival John Mahama to lead a country viewed as a beacon of stability in troubled West Africa.

Voters queued up at polling stations from the crack of dawn to pick a president among 12 candidates and members of parliament for 275 constituencies.

As polling stations closed at 1700 GMT, raucous crowds thronged the streets of the historic Jamestown area of the oceanside capital Accra to celebrate another peaceful election.

Crowds cheered and chanted “four more years!” as incumbent president Akufo-Addo of the New Patriotic Party (NPP) cast his vote in the eastern town of Kyebi.

A November survey by the University of Ghana put Akufo-Addo ahead with 51.7 percent of support.

“I’m feeling fine, happy that the process is going well and peacefully,” the 76-year-old Akufo-Addo said.

“It’s too early to make an assessment, but I understand there have been a few hitches,” Mahama said after casting his vote.

“We call on all our agents and all Ghanaians to stay alert. When voting is done and counting begins, go to the polling station and monitor the counting,” the opposition NDC’s Elvis Afriyie Ankrah told a news conference in Accra.

The main contenders have faced each other at the ballot box twice before. Mahama was president for four years until 2016, when his rival succeeded him.

Key issues in this year’s vote include unemployment, infrastructure, education and health.

– Graft allegations –
“There are no jobs. I want Mahama. The current government say they are doing this and that but it is all talk, they have not done anything for us,” said 44-year-old Aku Brown, an unemployed mother of two.

“The economy is very bad… The government has to make it up to us,” Brown said.

Ghana has made giant strides over the past two decades and is the world’s second-largest cocoa-producing country, but many still live in extreme poverty with scarce access to clean water or electricity.

Growth in the nation of 30 million people, hit hard by the coronavirus pandemic, is expected to fall this year to 0.9 percent — its lowest in three decades — according to the International Monetary Fund.

Akufo-Addo has been given high marks for his handling of the pandemic and his record on free education and improving access to electricity.

But he has disappointed some with his performance on tackling graft — the key issue on which he was elected four years ago.

However Mahama has found it hard to highlight this, as he himself left office under a cloud of corruption allegations.

Mahama has also been criticised for poor economic decisions and racking up unsustainable debts.

– Symbolic peace pact –
The relative stability in Ghana contrasts with that of other countries in the region, with deadly unrest this year in Guinea and Ivory Coast.

“We don’t go to places where democracy is fake, where it’s a theatre,” EU’s chief observer Javier Nart told AFP.

In Ghana, he said, “it’s not the Kalashnikov that commands, it is the ballot box.”

There have been seven peaceful transfers of power since Ghana returned to democracy nearly 30 years ago.

The two major parties have consistently accepted electoral outcomes and pursued any grievances through the courts.

To ensure its continued tradition of peaceful polls, Akufo-Addo and Mahama on Friday signed a symbolic peace pact.

The coronavirus pandemic has posed a challenge in this year’s election, with 10,000 more polling stations than usual set up for the nation’s 17 million registered voters.

Hand sanitisers were made available for voters, who underwent temperature checks before being let into polling stations.