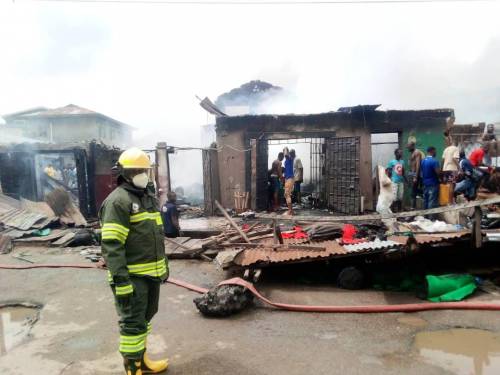 Shops destroyed as fire guts foam market in Lagos. The fire, which reportedly started around 1:00pm, was said to have started at number 16, Ladipo Street in Mushin.

Items worth millions of naira were destroyed on Saturday when fire razed a foam market in the Mushin Local Government Area of Lagos State.

The fire, which reportedly started around 1:00pm, was said to have started at number 16, Ladipo Street in Mushin.

He added that first responders including LASEMA operatives have been deployed to the scene to prevent the fire from escalating to adjoining buildings.

He said, “The fire, which cause is yet to be ascertained, has now been brought under control and stopped from further escalating to adjoining buildings, with no loss of life nor injuries recorded so far at the scene of the incident.

“LRT led by the DG/CEO LASEMA, Olufemi Oke-Osanyintolu, officers of the Nigeria Police, LASG Fire, LRU Fire, LNSC are responders at the scene working together to curtail the inferno from escalating to more adjoining buildings. Rescue operation ongoing.”