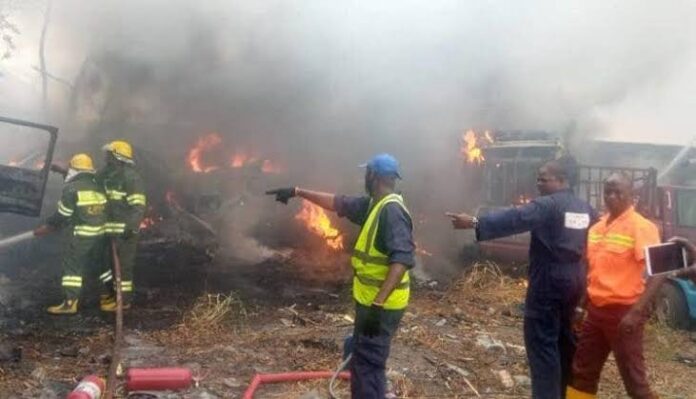 A fire at the office of the Lagos State Traffic Management Agency in Oshodi on Friday razed 10 cars and a trailer.

The fire started at a section of the agency’s premises where impounded vehicles were kept but its cause could not be ascertained by witnesses.

After emergency service officials battled and put out the fire, the Lagos State Emergency Management Agency (LASEMA) revealed that no life was lost as a result of the fire.

A total number of ten cars and one trailer were razed by the fire at the LASTMA office in Lagos on August 14, 2020.
The fire started at a section of the traffic management agency’s premises where impounded vehicles are kept.

“A total number of ten cars and one trailer were razed by the inferno,” the LASEMA Director-General, Dr Olufemi Oke-Osanyintolu, said in a statement.

“No casualties were recorded at the scene as the LRT Fire Unit and LASG Fire Service were all responders at the scene who successfully worked together to put out the fire”.

Witnesses had no clue about the cause of Friday’s fire

A short clip shared on Twitter by the agency gave an insight into the effort made by emergency workers to put out the fire and a peek into the damage it did.

LASTMA, which is responsible for traffic management in Lagos, had not put out any official reaction on its platforms as of the time of filing this report and it remains unclear how the agencies will deal with the damage done and if all the vehicles were impounded.