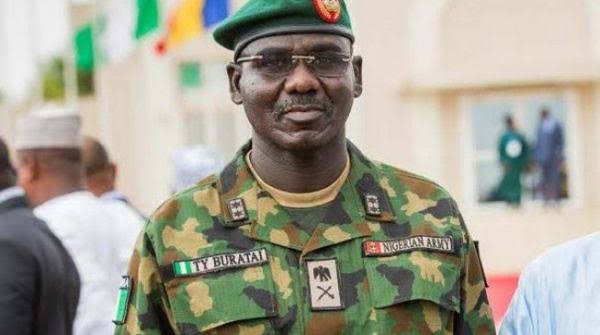 The Nigerian Military has cautioned Borno State Governor, Babagana Zulum, against making public remarks about what it described as unverified allegations against its personnel in the theatre of operations.

This formed part of the recommendations of an investigative team set up to verify the allegations that soldiers in the war front have been engaging in farming and fishing activities.

The team lead, Major General Felix Omoigui, who is also the Deputy Theatre Commander Operation Lafiya Dole, briefed reporters on the findings of the team on Friday in Maiduguri, the Borno State capital.

He revealed that the allegations emanated from personnel of some security agencies, which were neither investigated nor verified before reporting same to the governor.

Omoigui who described the allegations as false and malicious explained that when the team visited Baga town, there were no records of fishing or farming by the troops as alleged.

“The prohibition of troops from engaging in farming and fishing activities in Area of Responsibility is contained in the Standing Operative Procedures,” he stated.

The deputy theatre commander insisted that soldiers have been constantly warned not to get involved in any farming and fishing activities.

He stressed that the investigative team also found that the entire area of Baga was too heavily mined with Improvised Explosive Device (IED) to encourage any farming activity, adding that 55 mines have so far been detonated since the town was reclaimed.

Overzealous Security Agencies?
“The allegations were conjured by some overzealous security agencies who for personal glory and without recourse for the tenets of inter-agency cooperation decided to propagate falsehood.

“The Governor of Borno State believed these allegations levelled against troops of the 19 Brigade in Baga given his recent utterances,” Omoigui said.

He added, “Remarks of highly placed persons is capable of demoralising the troops which would negatively impact on operations and the confidence of the locals in the military.”

The major general said the report faulted the governor has been in constant touch with the Theatre Commander and the Sector 3 Commander for not reporting the allegation for investigation.

He decried, “Allegations of such nature could be avoided if the military authority was contacted on issues concerning troops activities before going public.

“The realisations that the allegation emanated from security agencies could trigger reactions and animosity among troops and attendant negative consequences.”

According to him, the report recommends that Governor Zulum should be advised on the need to contact the Headquarters of the Theatre Command to verify any allegation against troops in Operation Lafiya Dole.

While declining to name the supposed security outfit responsible for the allegations, Omoigui advised security agencies to educate their personnel on the need to verify issues before disseminating same as intelligent reports.

When contacted, the governor’s aide on media and strategy, Isa Gusau, stated that his principal had gone beyond that.

He said, “He (Zulum) made his point which was not personal, and has moved forward.

“The governor has throughout this week, been engaged with high-level meetings at the Presidency and with the military’s service chiefs whom he visited in Abuja, to enhance collaboration on the more urgent issue of reclaiming peace in Borno.”