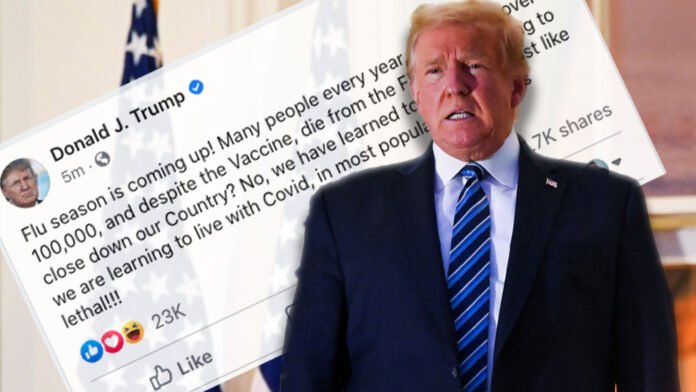 Facebook on Tuesday removed a post by US President Donald Trump for downplaying Covid-19 danger by saying the seasonal flu is more deadly, in a rare step against the American leader by the leading social network.

A day after checking out of a hospital where he received first-class treatment for Covid-19, Trump used Twitter and Facebook to post messages inaccurately contending that people have more to fear from the flu.

“We remove incorrect information about the severity of Covid-19, and have now removed this post,” Facebook said in reply to an AFP inquiry.

Twitter added a notice to the tweeted version of the Trump post , saying the message was left up due to public interest but that it violated rules about spreading misleading and potentially harmful information related to Covid-19.

Trump checked out of hospital Monday after four days of emergency treatment for Covid-19, pulling off his mask the moment he reached the White House and vowing to quickly get back on the campaign trail.

Shortly beforehand, Trump had tweeted that Americans, who have lost nearly 210,000 people to the pandemic, should not be afraid of the .coronavirus.

Facebook in August removed a video post by Trump in which he contended that children are “almost immune” to the coronavirus, a claim the social network called “harmful COVID misinformation.”

That was the first time the leading social network pulled a post from the president’s page for being dangerously incorrect.

Facebook faces pressure to prevent the spread of misinformation while simultaneously being accused of silencing viewpoints by calling for posts to be truthful.

Health officials have urged people of all age groups to protect themselves against exposure to the virus, saying everyone is at risk.

Trump has unleashed an array of misleading medical speculation, criticism for his own top virus expert and praise for an eccentric preacher-doctor touting conspiracy theories.

Facebook has largely held firm to a policy that it would not fact-check political leaders, but it has pledged to take down any post which could lead to violence or mislead people about the voting process.

A coalition of activists has pressed Facebook to be more aggressive in removing hateful content and misinformation, including from the president and political leaders.