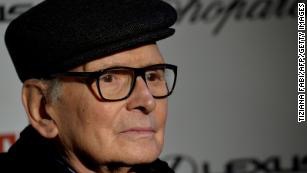 Ennio Morricone, the Oscar-winning film composer has died at the age of 91, his lawyer told CNN Monday.

He died at dawn in a Rome hospital after falling and breaking his leg, his lawyer Giorgio Assumma said.

Morricone is best known internationally as the composer behind the instantly recognizable melodies from “The Good, the Bad and the Ugly” and “Once Upon a Time in the West.”

The Italian composer was famous for the scores of spaghetti Westerns and won an Academy Award for his score for Quentin Tarantino’s “The Hateful Eight.”