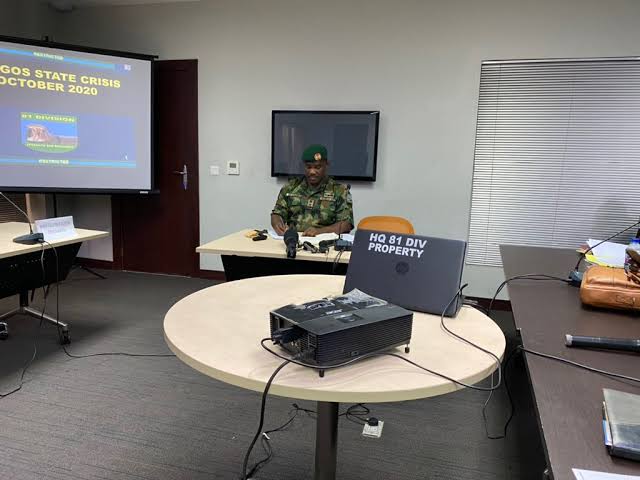 Footage presented by the Lekki Concession Company (LCC) has shown that several trucks said to belong to the Nigerian Army, were indeed deployed to the Lekki Tollgate area of Lagos State on October 20.

In the video presented on Saturday to the judicial panel of inquiry and restitution set up to investigate incidents of police brutality and extrajudicial killings, a number of trucks were seen arriving at the Lekki Toll Gate at about 6.43 pm on that day.

But after about three hours of watching the footage, the counsel to the #EndSARS protesters, Adeshina Ogunlana, who was earlier given access to the video complained that the footage is not the one that should have been played.

He claimed that a particular recording was skipped, explaining that he was given tapes tagged t1 and t1 full.

The panel is investigating the Lekki Tollgate shooting and other issues regarding the now-defunct Special Anti-Robbery Squad (SARS) and is hoping to unravel the circumstances surrounding the controversial intervention by the Nigerian Army during the #EndSARS protest.

At the resumption, Justice Doris Okuwobi (rtd), said she was calling up the Lekki Toll company first so that the footage of the happenings around the Lekki Toll Gate would be watched by all parties including the Nigerian Army.

The Army had initially denied its role in the incident, describing such reports as fake news.

They, however, later came out to admit that officers had been deployed to the area on the orders of the state government after a curfew had been imposed to quell the violence that erupted amid the #EndSARS protest.

But the State Governor, Babajide Sanwo-Olu, has yet to make any definite statement about the who gave the orders.

Addressing the panel last Saturday, Commander of the 81 Military Intelligence Brigade, Brigadier Ahmed Taiwo, reacted to the situation saying: “the Nigerian army was not happy about two things. The first is his (Governor Sanwo-Olu’s) denial that he asked us to intervene when in actual fact, it was the proper thing to do,”.

Speaking of the incident itself, Brigadier Taiwo insisted that only blank bullets containing gunpowder were fired on that day.

According to him, if real bullets were indeed fired, one bullet had the potency to kill three persons at one shot.

But the testimony contradicts what was seen in live footage from the scene.

Disc Jockey, Obianuju Catherine Udeh, popularly known as DJ Switch was one of those who filmed the incident live on Instagram.

In her live stream at the scene of the incident which immediately went viral at the time, many injured persons were seen, as some protesters tried to extract bullets from bleeding people after the men in military uniform had opened fire.

Some were also seen administering CPR to revive other injured victims.

It was also widely reported by some eyewitnesses that several had been killed and the security officers were clearing up the bodies – claims which the military immediately dismissed all as fake news.

A recent investigation from the Cable News Network, (CNN) also faults the claims of the military, raising more questions from Nigerians.