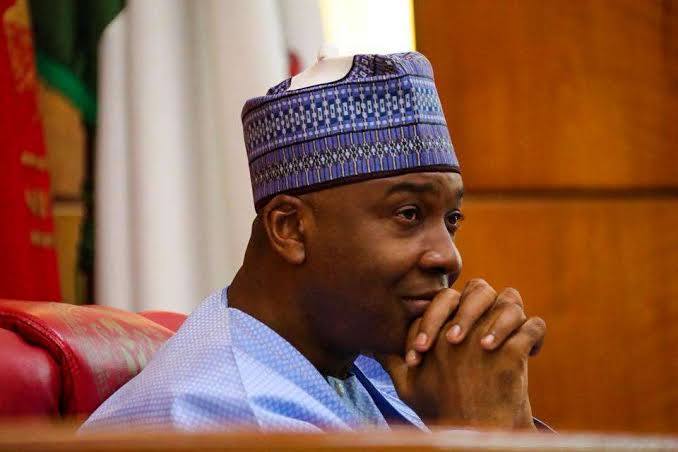 EFCC is accusing Mr Saraki of withdrawing over N12 billion cash from the account of the Kwara State Government.

A witness brought to testify in the trial of former Senate President Bukola Saraki before a Lagos Division of the Federal High Court has narrated how Mr Saraki allegedly purchased his Lagos properties with funds drawn from the coffers of the Kwara State Government.

The witness, Olamide Sadiq, an investigator with the anti-graft agency, EFCC, presented documents to the court on how money was withdrawn from the state treasury and deposited into Mr Saraki’s domiciled Guarantee Trust Bank (GTB) account. Mr Sadiq appeared before the judge, Mohammed Liman, according to a statement signed by the EFCC spokesperson, Wilson Uwujaren.

The EFCC is accusing Mr Saraki of purchasing the properties from the Presidential Implementation Committee for the Sale of Government Property through shell companies.

The agency alleged in a supporting affidavit that Mr Saraki, who served two terms as Kwara State Governor between 2003 and 2011, “withdrew over N12 billion cash from the account of the Kwara State Government and paid same into his accounts domiciled in Access and Zenith Banks through one of his assistants, Abdul Adama, at different intervals.”

The houses, located at 15a, 15b and 17 MacDonald Road, Ikoyi area of the state, had however, been the subject of Mr Saraki’s arraignment at the Code of Conduct Tribunal (CCT), which he won in 2017.

The commission had also on May 2019 marked the buildings with Mr Saraki accusing the EFCC of misleading the court into granting the order as neither he nor his lawyers were aware of any application for any forfeiture order.

Subsequently, the anti-graft agency had also approached the court for final forfeiture of the properties, prompting the court to fix a date for both parties to call deponents and witnesses.

At the resumed trial, Mr Sadiq, who was led-in-evidence by the EFCC lawyer, Nnaemeka Omewa, narrated to the court how he interrogated Mr Saraki’s GTB account officer, Bayo Daudu, about the alleged infractions discovered relating to monies withdrawn from the state’s treasury during his administration.

He said: “As part of the investigation, we wrote to GTB requesting for the bank statement of Dr Bukola Saraki, and there was a need to interrogate Bayo Daudu.

“In the course of interviewing him, I showed him the statement of account along with other documents including offer letters from the Presidential Implementation Committee for Land Property relating to the Ikoyi properties.”

He further told the court that findings necessitated the extension of investigation to the accounts belonging to the state, and to interview more witnesses believed to be involved in how monies were withdrawn from the accounts of the state and paid into the GTB account of Mr Saraki

He said: “There was a need to interview Afeez Yusuf, who volunteered a statement.

“I asked him how many accounts the Kwara State Government House operated, which he obliged were domiciled with Zenith Bank and Access Bank (then Intercontinental Bank).”

Mr Sadiq also informed the court that the banks were contacted to provide the EFCC with statements of account of the Government House.

He further revealed that Mr Yusuf, who worked as a cashier at the Government House, was making withdrawals from the Access and Zenith bank accounts during the period under investigation.

According to Mr Sadiq, those interviewed during his investigation said there was a directive from Mr Saraki that the money withdrawn be given to Abdul Adama, a personal aide of the former governor.

He said: “We were able to lay our hands on some of the documents, but some had been mutilated; the documents showed several payments of money withdrawn from the state coffers and deposited at various times into the account of Saraki domiciled in GTB.”

“From the investigation, these properties in question were purchased with a loan obtained from GTB which was paid off with money withdrawn from the state, deposited into Saraki’s GTB account to defray the loan.”

“The same period the money was withdrawn from the Government House account, they were deposited into the account of Saraki,” he added.

According to the statement, Mr Omewa, who had earlier called on Mr Yusuf during the proceedings, also confirmed his role in withdrawing money from the Government House account based on the instruction of his boss, Isiaka Kareem, then Controller, Finance and Account at the Government House. The money was to be given to persons on a list given to him by Mr Kareem

About N1.16 billion withdrawn from the government account is alleged by the EFCC to have been diverted.

Meanwhile, counsel to Mr Saraki, Kehinde Ogunwumiju, during a cross-examination session with the witnesses, told the court that his client, who was already an accomplished businessman before becoming governor , was capable of acquiring properties without government money.

The case has been adjourned till December 16, for “final written addresses”.