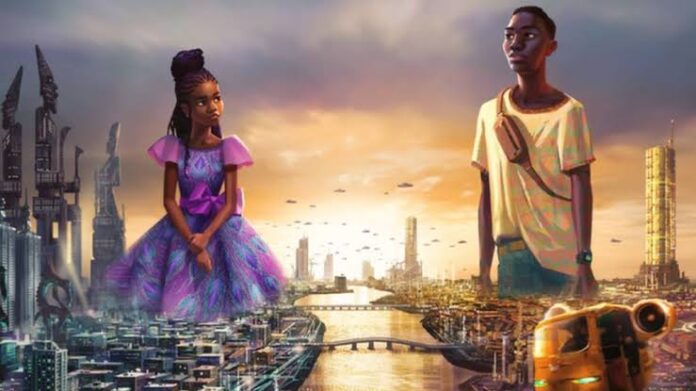 The series is titled Iwaju which, in the Yoruba language, roughly translates to “The Future’’

Walt Disney Animation Studios have confirmed a partnership with a pan-African comics company, Kugali, on a forthcoming animated sci-fi series set for 2022 release.

The series is titled Iwaju which, in the Yoruba language, roughly translates to “The Future’’.

Disney also released the first look at the visual development art from the series on its social media handles.

Announcing the collaboration on Twitter, Kugali said they had been keeping this secret for over a year. They also described it as a first-of-its-kind collaboration between Disney Animation and Kugali.

Speaking about the project in a report published in Deadline, Disney Animation Studios’ chief creative officer, Jennifer Lee, said, “Here were three talented comic book artists. Their dream was to bring African stories created by African artists to the world, highlighting the diversity of cultures, histories, and voices across the continent. Their talents as storytellers blew us away. I’m proud to announce the first of its kind collaboration to bring original long for series to Disney+.”

Back story
In January 2019, Kugali’s founders granted an interview to BBC where they said they hoped to take on Disney. Lee stumbled on the article and the rest, they say, is history.

Similarly, Disney also announced that its first-ever original animated series on #Disney+, Baymax!, Zootopia+, and Tiana are coming in 2022, and Moana, the series, in 2023.

On their website, Kugali says they remain committed to increasing diversity and representation, one character at a time, and making it possible for more African creators than ever before, to share their stories with the world.

In a first-of-its-kind collaboration, Disney Animation and Pan-African entertainment company Kugali will team up to create an all-new, science fiction series coming to #DisneyPlus in 2022: Iwájú. Check out a first look at visual development art from the series. pic.twitter.com/9iuWFDr61T