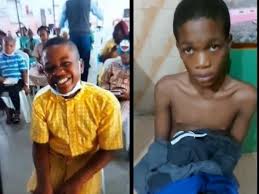 A medical report is out on the 11-year-old student said to have been sexually abused in the dormitory by fellow students of Deeper Life High School in Akwa Ibom State.

The victim’s father, Iniobong Archibong, disclosed this on Monday to the media.

“I just got a (medical) report today from the hospital,” said Mr Archibong who, however, said he would only disclose the content of the report after consultation with his lawyer.

“He has not yet been discharged. As soon as he is discharged, we will let the public know,” he added.

The JSS1 student is spending his ninth day in an undisclosed hospital in Uyo.

He was taken to the hospital on December 19 by his parents, after the mum, Deborah Okezie, took to Facebook to cry out over the alleged sexual abuse.

“They will remove his boxer and push their legs and hands into his anus,” Mrs Okezie said in the video which has gone viral on Facebook and Twitter.

“Look at a child I sent to school, he came back with a broken anus,” she added.

She said her son was frequently starved and beaten up by the senior students.

Mrs Okezie said there has been pressure on her to pull down from Facebook, video clips containing her complaint.

Deeper Life High School, with 21 campuses across Nigeria, is owned by the pentecostal church, The Deeper Christian Life Ministry. The school has its headquarters in Lagos, South-west Nigeria.

Meanwhile, William Kumuyi, a cleric and head of the Deeper Christian Life Ministry was trending on Twitter, Monday, because of the sexual abuse allegation.

Most Nigerians who commented on the microblogging site called on Mr Kumuyi to ensure the victim gets justice.

Enobong Mbobo, the commissioner for education, whose ministry is investigating the allegation, did not respond to calls and a text message seeking her comment.

Gloria Estefan Reveals She Was Sexually Abused At Age Nine

Actor, Baba Ijesha arrested for allegedly defiling a 14-year-old girl starting from when she was 7