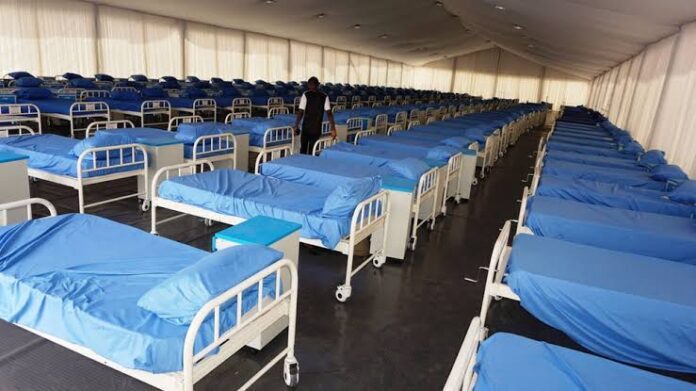 Two isolation centres in Abuja were closed a month ago after a drastic reduction in the number of coronavirus patients.

About a month after authorities in Abuja, Nigeria’s capital, shut two COVID-19 centres for lack of patients, health workers deployed to the facilities are lamenting that they have not been paid their accrued allowance of about three months.

The media reported how COVID-19 isolation centres located inside Karu and Asokoro general hospitals were closed following the reduction in the number of patients.

Authorities said they decided to close down both centres, leaving the ones in Idu and THISDAY Dome, since there are now fewer patients infected from the COVID-19 virus.

The acting secretary, health and human services secretariat, Federal Capital Territory Administration (FCTA), Mohammed Kawu, said the centres were not purposely built as COVID-19 treatment centres, hence the need to convert them to their initial purpose.

“We officially converted both centres to conventional hospitals on August 24, 2020, because the number of COVID-19 patients is tremendously low,” Kawu told PREMIUM TIMES on the phone.

Health worker’s ordeal
Meanwhile, Aliyu Saidu, who worked as a hygienist at the Karu isolation centre, said they are yet to be given any official reason as to why they have not received their pay for June, July, and August, weeks after the centres were shut.

His stance was reechoed by several isolation workers in both facilities who spoke to this newspaper. Some of them said they could not make much fuss about it for fear of being victimised as they are also working under the Abuja health authorities as professionals.

“I started work on May 7, 2020. I received salary for May but after then no salary has been paid. I even contracted COVID-19 while working at the centre,” said Mr Saidu, a contract staff.

“I left my family in Nasarawa because of this job.”

A nurse at the centre, who did not want his name on print for fear of victimisation as he is a government staff, gave a more detailed explanation.

“We are agitating about our inducement allowance. At the onset of COVID-19, we were asked to serve as volunteers at the isolation centres, which we agreed to for the interest of Nigerians. We were trained and deployed to various COVID-19 treatment centres in Abuja, under the FCT. One of which is Karu where we served.

“For the first month it went well and we were fully paid. But we are yet to be paid for June, July, and August and we were worried. Nobody has officially communicated to us as to why we are yet to receive payment.

“Eventually, we were told that the treatment centre will be closed because of the number of COVID-19 patients have decreased. We have been patient because we didn’t want to raise any issues and we expect the government to fulfil their promises. But until date, we are yet to receive a dime from the three months outstanding inducement allowances.”

The nurse also shared how the situation is negatively affecting his life.

“I left my family for four months just to be at the treatment centre. I have not been able to engage myself in other activities that can give me income. I have been separated from friends and other social activities. Many of us contacted this virus during this period. Some people were hospitalised at this time.”

On measures taken to demand their pay from the authorities, the nurse said, “nurses, doctors, and scientists belong to different unions which they expected to talk to the government on their behalf. So far we don’t know what step they have taken because there is no communication but on our own part, we can’t do much.”

Claim and Counter-claims
Responding, Mr Mohammed, the acting secretary, health and human services of the FCTA denied claims that workers at the two centres have not been paid for three months.

“There are two categories of health workers. Those working at the treatment centres have been paid till August, so if anybody said they haven’t been paid, that is not correct,” the official said.

“The COVID-19 response did not start at the same time. The Asokoro isolation centre started operation in April while Karu and Idu started operations between May and June. The workers in these centres are paid based on when they joined the COVID19 response.

“All public health workers across the country were paid for the first three months as directed by the federal government.

When presented with the response from the FCT authorities, the health workers stuck to their claims. “The only salary I received is for April and May”, said Solomon Isah, who worked as a hygienist at the Asokoko centre.

“They just told us to go and promised they will pay but up till now, we have not heard anything”, he added.

Daily inducement allowance
Health workers treating COVID-19 patients are classified as frontline workers because of the risk involved in the job. It is voluntary and those that chose to be enrolled were given proper training on the handling, care and protection of patients.

Being the first respondents to patients, these health workers have continued to be at risk of exposure to COVID-19 virus.

Many of them contracted the highly contagious disease, which has infected closely 60,000 people in Nigeria, killing over a thousand.

Considering the enormous risks involved in the job, the government decided to pay them a daily inducement allowance, which is separate from the regular monthly salaries and other allowances of professionals, such as doctors and nurses.

Breakdown
The health workforce inside the isolation centres is broken down into four main categories, that are further divided into different units working under a single head.

His job mainly is to clean the holding areas; serve patients their food and drugs; clean surfaces that they touch and do laundry.

There are also scientists and pharmacists who also received the same pay as nurses.

Asides this COVID-19 daily inducement, professionals such as doctors and nurses, also receive their normal salaries and other allowances, such as the contentious hazard allowance.

The Nigerian government increased the normal hazard pay of N5,000 to a special COVID-19 hazard and inducement allowance of 50 per cent of consolidated basic salary to health workers at the advent of the pandemic.

Hazard pay, a wage supplement paid to workers who do dangerous jobs, has been a major grouse of Nigerian health workers since the start of the coronavirus pandemic.

The failure and disparity in payment have resulted in pockets of strikes which had threatened Nigeria’s COVID-19 response.

Health workers’ pay raises sustainability concerns
Meanwhile, some experts who weighed in on the matter raised concerns on whether the government had plans of sustaining the daily inducements before agreeing to it.

Michael Okoro, a health finance analyst, said the back and forth between FCT authorities and health workers fuels concerns on whether the government can maintain the standard it is using now in an unfortunate event of a “second or third wave.”

For Ikemesit Effiong, a forensic expert, it is not about whether the amount is big or small, it is whether it can be sustained.

“There are people that will say based on a global standard, that the 20,000 per day, which about $70 dollars is okay since McDonald waiters can get such wages, but we have to look at it from the Nigerian perspective,” he said.

“Nobody knows if we have reached the apex of our curve. The government should be able to look into the future and say if this goes into the second and third quarter of 2021, will we be able to maintain isolation centres, staff, and run them with the same amount we are using now?

“Can we be able to open new centres of the standard they are currently being run now, with the same remuneration packages and inducements?

“This is a conversation worth having at the highest level of governance. Sustainable raises important questions”, said Mr Effiong, head of research at SBM Intelligence.