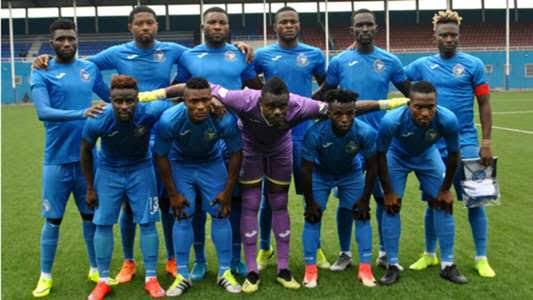 Enyimba on Wednesday crashed out of the CAF Champions League despite a 2-1 home win over Sudanese side, Al Merrikh.

The Nigerian team had lost the first leg of the play-off 3-0 and needed to score four goals better than their opponents to make it to the group stage of the continental competition.

However, the Aba Elephants started the game on a wrong footing after Seif Terry gave the Sudanese club the lead, just five minutes into the encounter.

Some ten minutes later, the 2003 and 2004 winners of the competition, levelled things up through a Victor Mbaoma strike.

Despite waves of attacks, the record eight-time winners of the Nigerian Professional Football League (NPFL), could not breach their opponent’s defence as the first half ended 1-1.

Enyimba’s early pressure on Al Merrikh would, however, be rewarded when Mbaoma netted a second goal from the spot in the 51st minute.

But coach Fatai Osho’s men could not conjure any magic to score three more goals needed to make the next stage of Africa’s premier club football competition.

The 2014 African champions will now play in the second-tier CAF Confederations Cup.

Messi To Play With Neymar And Mbappe For First Time, Says Pochettino

Messi, Ronaldo Gone From Champions League But The Absence Of fans Hurts Most