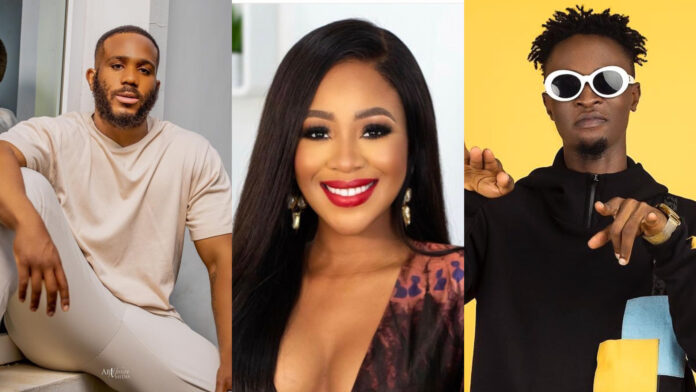 Since July 19, the fifth season of one of the most popular reality television shows in Nigeria, Big Brother Naija (Lockdown Edition), has no doubt thrilled its numerous fans since 20 housemates began the tussle for the N85m grand prize.

Week in, week out, fans of the reality show have argued about their favourite housemates on social media, especially Twitter and Instagram.

But one of the undeniable highlights of this Lockdown Edition has been the love triangle between billionaire son of Terry Waya, Terseer Kidd Waya; Erica Nlewedim; and Olamilekan Agbeleshe, popularly known as Laycon.

The centre of attraction, Erica, has shown her undeniable physical attraction for Kidd Waya. However, she has also stated that she is “mentally attracted” to Laycon, a graduate of Philosophy from the University of Lagos.

Over the past weeks, Erica and Kidd Waya have been lovey-dovey but not without the usual hiccups of a budding relationship.

Laycon on his part seems to have painfully but graciously accepted his fate.

All this frenzy has arguably earned Erica a reputation of being one of the most criticised housemates on social media with some netizens even using derogatory words to describe her.

Responding to some of the comments, Erica’s social media handler said in part, “Slut-shaming continues; the smear campaigns double up. The constant dragging is raised up and intensifies. How is being a woman with ‘choices’ an offence? How is having a ‘preference’ a bad thing? She has been labelled all sorts for having a choice. The latest one is being tagged a ‘classist.’ Erica is and can never be classist. None of her actions in the house has insinuated nor pointed to that direction. We ask, does she deserve the slut-shaming, lies and propaganda against her? Time will tell.”

Meanwhile, viral clips from the show have shown Erica and Kidd Waya in compromising positions which has made viewers opine that the duo engaged in coitus. A few days ago, the beauty pageant contestant, Erica, referring to Kidd Waya said “we did everything together.”  She however, said if Biggie played the video of what happened there, she would not want to watch it. Supporters of the three housemates on Twitter were up in arms over the situation.

@Bolanle tweeted, “Nigerians will find it hard to believe that a rich and handsome man like Kidd Waya would fall in love just like that. They believe Lekan truly loves Erica because he’s poor and not so good-looking so he’s sincere. I don’t blame you people.”

@leroikingin tweeted, “All of you bashing Kidd Waya and Erica are really not serious. Isn’t it the same sex Nina and Miracle had? Teddy and Bambam, too? Mercy and Ike, etc.? So, why is theirs different? Why are you all trying to bring them down?”

@Official_mohnyc tweeted, “To be fair, Kidd Waya must go home. The guy doesn’t need the money, it’s getting boring, and it’s a good chance to get rid of him, so Erica can focus on the game. So, elites, if you’re wise, you will stop with this ‘saving your imaginary in-law’ nonsense. Give Laycon your votes.”