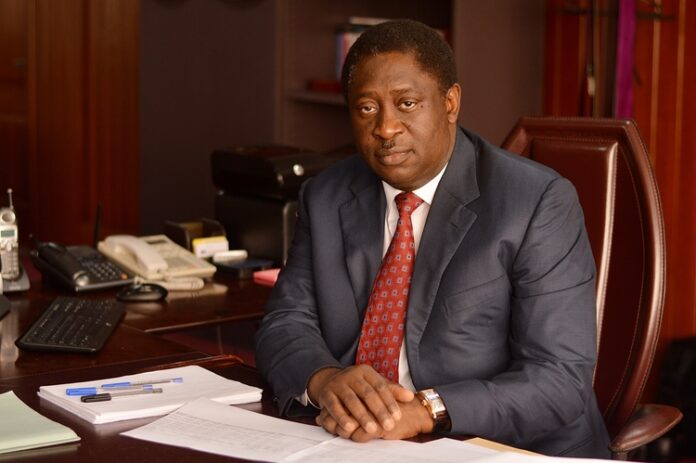 The decision of President Muhammadu Buhari to set up a visitation panel, for the University of Lagos, made up of former university vice-chancellors was wrong, Wale Babalakin said in his resignation letter on Tuesday.

The media reported Mr Babalakin’s resignation as the pro-chancellor of the troubled institution just after the panel set up by the president submitted its report.

The panel was set up after an August 12 emergency meeting of the university’s governing council, led by Mr Babalakin, announced the removal of the institution’s substantive vice-chancellor, Oluwatoyin Ogundipe.

Mr Ogundipe rejected his removal as illegal, thus worsening the crisis in the federal university for whom the president is the Visitor.

Consequent upon the controversy, Mr Buhari asked Mr Babalakin and Mr Ogundipe to step aside from the offices.

The panel was to look into the crisis rocking the university and the allegations levelled against Mr Ogundipe by the governing council.

The committee submitted its report to the minister of education, Adamu Adamu, Thursday without divulging the content.

In his resignation letter, Mr Babalakin faulted the membership of the visitation panel.

“The membership of the Visitation Panel is simply inappropriate in the circumstance. How can a committee of Vice-Chancellors determine the culpability or otherwise of the actions of a Pro-Chancellor and a Governing Council? On the face of it, it is simply wrong!,” he said.

According to him, the vice-chancellors on the panel were drawn from relatively smaller universities who are not likely to have a comprehensive understanding of the procedure contained in the University of Lagos Act (as amended).

“Even Vice-Chancellors of state universities were included. As Chairman of the Federal Government Negotiation Team, I know the challenges faced with the administration of state universities,” Mr Babalakin said while insisting that the removal of Mr Ogundipe followed due process.

The Honourable Minister of Education

1. I would like to thank the President of the Federal of Nigeria, President Muhammadu Buhari for giving me the opportunity to serve as the Pro-Chancellor of the University of Lagos (the “University”) from May 2017 till date. I am also grateful that I was considered fit to be the Chairman of the Federal Government Negotiation Team on the Agreement reached with university unions in 2009, from 6th January 2017 till date. I equally want to thank you, sir, for your role in recommending me to the President.

2. Recent events have made my position in these two offices untenable.

a. Corruption and financial recklessness;

c. Complicity in the collapse of the University library and planned cover-up;

e. Depriving the Faculties in the University of funds;

f. Concealing and distorting finances of the Internally Generating Units of the University;

g. Undermining the academic process and seeking to appoint a Professor by fiat;

h. Siphoning of the University’s funds through dubious contract awards;

i. Undermining the office of the Registrar;

j. Failure to follow due process in organizing the University’s convocation ceremony; and

k. Sponsoring or acquiescing in the unconstitutional actions of the Academic Staff Union of Universities (ASUU), University of Lagos chapter.

4. Sir, it is noteworthy that all the Federal Government Representatives who are the independent members on the Governing Council voted for the removal of the Vice-Chancellor.

5. After calm had been restored in the University, the Visitor acting within his powers, set up a Presidential Visitation Panel to review the actions taken by Governing Council. The Vice-Chancellor (who had been removed from office) and myself were told to recuse ourselves for the duration of the Visitation Panel. I find it difficult to understand how a non-executive Chairman of a Governing Council could be requested to recuse himself during the visitation

a. To review the report of the Council sub-committee on review of expenditure of the University of Lagos since May 2017 and make appropriate recommendations after affording all those indicted an opportunity to defend themselves;

b. To examine the steps taken by the Council leading to the removal of the Vice Chancellor, Professor Oluwatoyin Ogundipe, and ascertain whether due process was followed as stipulated in the Universities (Miscellaneous Provisions) (Amendment) Act, 2003, and the principle of fair hearing adhered to;

c. To determine whether the process (if any) leading to the appointment of the acting Vice Chancellor for the University was consistent with the provisions of the enabling Act;

d. To make appropriate recommendations including sanctions for all those found culpable by the special visitation team on the allegations contained in the report as well as other subsequent actions arising therefrom; and

e. To make any other recommendations that will assist the government to take decisions that will ensure peaceful, stable and effective administration of the University.

8. As stated earlier, the Vice-Chancellor was removed for various reasons and not just as a result of the findings contained in the Dagari Report. Items (b) and (c) were directed at the Pro-Chancellor and Governing Council. Unfortunately, those items deal with the interpretation of the laws of the land. The appropriate forum to determine the laws of the land is a court of law or a judicial tribunal. It cannot be determined by academics of a different discipline no matter how distinguished. These terms of reference are ultra-vires the Visitation Panel as constituted.

9. The membership of the Visitation Panel is simply inappropriate in the circumstance. How can a committee of Vice-Chancellors determine the culpability or otherwise of the actions of a Pro-Chancellor and a Governing Council? On the face of it, it is simply wrong! Furthermore, the Vice-Chancellors on the Panel were drawn from relatively smaller universities who are not likely to have a comprehensive understanding of the procedure contained in the University of Lagos Act (as amended). Even Vice-Chancellors of state universities were included. As Chairman of the Federal Government Negotiation Team, I know the challenges faced with the administration of state universities.

10. I only appeared before the Panel out of my very great respect for you, Sir. My training as a lawyer revealed to me very clearly, that the Panel was inappropriate for the assignment. During my appearance, I made it very clear that I was appearing in protest and the Panel, as constituted, could not determine the issues before it. The active participation of the staff of the Ministry of Education in the Panel and their contributions throughout the sittings especially the hounding of witnesses who came to testify against the Vice-Chancellor was enough to show very clearly that the technocrats in the Ministry had a defined agenda. Their obvious agenda was to humiliate the Governing Council. Sir, fortunately there is a verbatim recording of the proceedings of the Visitation Panel, and you may wish to direct objective persons to listen to the recording.

“I have discovered that there are too many vested interests in this matter, who are not approaching the issues objectively. For this reason, I strongly advise that the Visitation Panel should not submit any formal report to the Minister that may hinder my ability to deal with the issues comprehensively”

12. I have served the university system in Nigeria with my heart and intellect. Amongst other offices, I was:

13. These were made possible by a system that provided resources and also ensured proper monitoring of the resources. The educational system in Nigeria requires more funding but most importantly, it requires prudent management of the limited resources. It was my determination to ensure that the limited resources of the University of Lagos were properly utilized that motivated me to lead the Governing Council to take the decisions which the Governing Council took.

14. In all these positions that I have held, I did not receive any remuneration. Specifically:

a. I did not receive any sitting allowance.

b. I did not receive any tickets or travel allowance.

c. I did not receive or use any official car.

d. In the University of Maiduguri and University of Lagos, I did not allow the institutions to provide me with food or drinks. I paid for every right or privilege that was conferred on me.

e. Even when I travelled to the United Nations Educational, Scientific and Cultural Organisation (UNESCO) on behalf of the Federal Government of Nigeria, I paid for my ticket and my expenses.

f. I did not obtain any contract from the education sector in my relative long sojourn in the sector.

15. My motivation for my actions is that I had the best education that an intellect could provide in Nigeria and abroad. It is my fervent desire that every Nigerian should have the sort of opportunities I had.

16. I remain very grateful to all the members of the Federal Government team on the Governing Council of the University of Lagos, namely:

17. It would be very difficult to find a group of more selfless persons than these individuals. It is acutely hurtful that I am leaving before achieving our goal of sanitizing the University of Lagos, and turning it to a reference point in Africa and the world, rather than the unenviable poor position it now occupies. Unfortunately, I must stand by principle. In a situation where my employers believe that the actions I took may not be right, the appropriate thing to do is bow out in honour.

Sir, may the Almighty Allah continue to bless you.