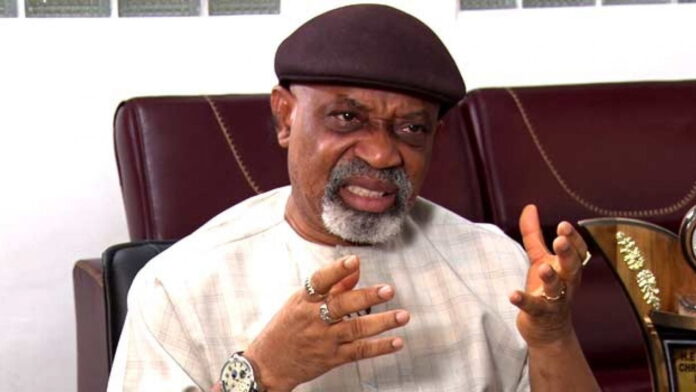 Minister of Labour and Employment, Dr Chris Ngige has stated that he has little control over the current impasse between the Academic Staff Union of Universities and the Federal Government.

Dr Ngige made this known on Monday while receiving members of the government side of the 2009 Federal Government/University-based unions agreement re-negotiation committee led by the Chairman, Prof. Nimi Briggs.

“As a conciliator, I have to make use of the labour instruments at my disposal. The bosses in the Federal Ministry of Education, do not feel the strike,” Ngige said

“There are things that are above me. I am not the Minister of Education. I cannot go to the Education Minister and dictate to him how to run his place”.

Speaking against the backdrop of the ongoing strike by the Academic Staff Union of Universities(ASUU), Ngige said the union needed to make known their grievances to the right ministry to enable speedy resolution.

“But I told ASUU that you should be bombarding them at the Federal Ministry of Education for this to be moved forward. There are many ways to do so. If you go to the labour act,” he said.

“There is something called picketing. You can picket. The strike is an ultimate thing. Picketing means that you can stay in the corridor, clapping or singing. Workers are permitted to do so. But I am tired of every time there is a disagreement, it is a strike.”

“Three have graduated in medicine from Chukwuemeka Odumegwu Ojukwu University Teaching Hospital in Awka in 2020, LUTH College of Medicine in October 2021 and UniAbuja in December 2021. Others are still there including those on my foundation’s scholarship and sponsorship”.

The academics are seeking improved welfare, revitalisation of public universities and academic autonomy among other demands.