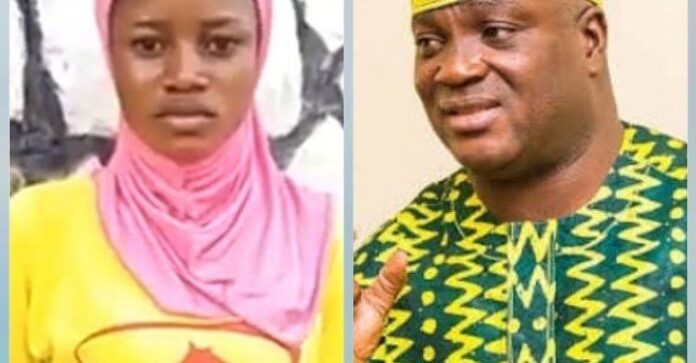 A 16-year old secondary school student has accused the Ogun State Commissioner of Environment, Abiodun Abdul-Balogun, of attempting to rape her.

Mr Abdul-Balogun has been interrogated by the police over the incident said to have occurred on December 31, 2020.

The SS3 student, Barakat Melojuekun, told the media that the commissioner fondled her breasts and recited incantations to scare her.

She said her screams forced Mr Abdul-Balogun to jump off her and offer her N2,000 to shut her up.

How it happened
On December 29, Miss Melojuekun said she was waiting at Idi Ade motorcycle taxi park in Ogun Waterside Local Government area for a motorcycle to take her to the NIMC registration centre when the commissioner saw her while driving by.

She said Mr Abdul-Balogun stopped and offered her a lift but she rejected the offer. She also said she turned down his request for her phone number.

“I didn’t know that he was commissioner. He said he knew me but I said I hadn’t met him before.”

Miss Melojuekun said after she left, Mr Abdul-Balogun got her telephone number from her friend who had been with her.

“My friend whom he pressured after I left the park sent my number to him. While at the NIMC registration centre, somebody called me and introduced himself as an aide to the commissioner. He said his boss wanted to see me but I told him I was busy trying to register for the NIN.”

She said the aide called her again at night and told her the commissioner would love to host her in his residence the following day, December 30, 2020 but she declined the invitation.

How I was deceived to his house
Miss Melojuekun, who lives with her grandmother, said the commissioner eventually got her attention on new year’s eve through her uncle.

“The commissioner’s aide later reached me through my father’s elder brother who is also a popular figure in the area. He is called Mr Lasisi. I can’t say whether he knew his intention or not though.

“He (her uncle) told my grandmother that someone needed a computer operator and asked me to dress corporately so he could take me there. He then took me to the commissioner’s house and asked me to wait at the gate.

“By the time I got inside, I saw someone who claimed to be the aide of the commissioner who had been calling me. He said I should follow him to where the computer was and I did.”

She said he instead took her to Mr Abdul-Balogun’s bedroom.

“Immediately the commissioner came into the room, his aide left and he locked the door and kept the key in his pocket. He asked for my school and class and I told him I am in SS3.

“The commissioner then asked if I was interested in any business and I said no. He asked if I have new year clothes and I said yes. He kept asking me what I needed and I told him nothing.

“He asked if I would collect a cash gift from him and I said I would. He then started pushing me onto the bed and pressing my breasts while chanting incantations. So I started shouting on top of my voice.”

She said the commissioner became afraid that the people downstairs in his house for a political meeting would hear her scream, so he left her.

“He jumped off me and brought out the key from his pocket. He offered me N2,000 but I rejected it. He locked the door again and threatened not to let me go until I collected the money. I collected it and he pushed me out of the room.”

Miss Melojuekun said she reported the incident to her parents who in turn reported the case at the police station.

Commissioner speaks
When our reporter on Sunday reached out to Mr Abdul-Balogun for his recollection of the incident, he asked the reporter not to disturb him.

The spokesperson of the state governor, Kunle Somorin, did not also respond when asked whether Governor Dapo Abiodun was aware of the incident.

Police interrogate commissioner
The media saw a copy of the invitation letter the Abigi Police Station sent to the commissioner.

The letter dated January 1 asked Mr Abdul-Balogun to appear at the station before 1 p.m. on the same day.

“You are invited to see the officer in charge of crime at the above named police office in connection with a case reported, which this office is investigating.”

“It is just a fact-finding invitation and your very cooperation will be appreciated. Upon arrival, please report to the Divisional Crime Officer, Abigi. Looking forward to seeing you on or before 01/01/2021 at 1pm,” the letter read.

The police spokesperson in the state, Abimbola Oyeyemi, said the police were still investigating the matter.

“The case is being handled by the Area Commander of Police in Abigi. They are currently investigating the commissioner and the outcome of police investigation would be made known to the public,” he said.

Meanwhile, a gender activist, Dunsi Olowolafe, urged the police to ensure justice is served in the matter.

“The police must ensure the commissioner is brought to book if found culpable,” he said.

EU Commissioner Hopeful People Vaccinated With AstraZeneca Can Enter US

Teenage Girl Arrested In Lagos For ‘Faking’ Own Kidnap