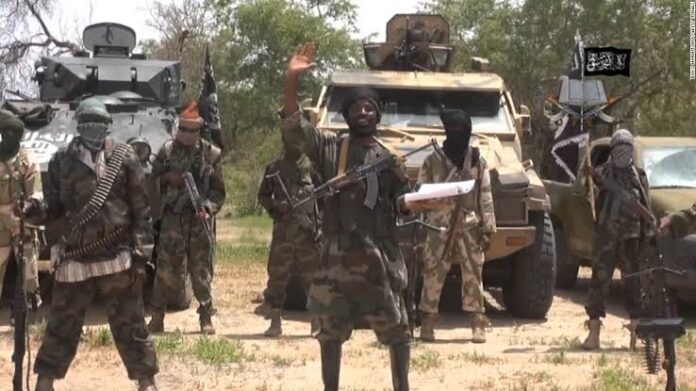 43 rice farmers were killed by members of the Boko Haram while harvesting their crops on Saturday.

In a three minute video released by Boko Haram on December 1 and seen by the media, the terrorist group has claimed that it is responsible for the death of over 40 rice farmers in Zabarmari, Borno State.

The group spoke in the video in Arabic and Hausa.

The media reported how 43 rice farmers were killed by members of the Boko Haram while harvesting their crops on Saturday.

Sources in Zabarmari, a community known for rice farming, informed this newspaper that the farmers were attacked as they were working on a rice field at Garin Kwashebe.

The farmers were attacked on Saturday as residents of the state were voting to elect local government council officials, for the first time in 13 years.

In reaction, President Muhammadu Buhari, on Sunday, expressed grief over the killings, noting that his administration had provided the needed support to the armed forces “to take all necessary steps to protect the country’s population and its territory.”

The presidency also faulted the farmers for farming without government approval.

Presidential villa spokesperson, Garba Shehu told the BBC that the farmers killed by Boko Haram had no permission to be there. He further said there were military procedures in war zones like the North-east so the farmers require a “military clearance.”

Many Nigerians have also taken to social media to condemn the gruesome attack on the villagers, calling for the sack of all service chiefs for failing to protect lives and properties in the country.

A masked Boko Haram leader in the video accused the farmers of arresting one of its members and handing him over to the military, claiming that was the reason for the killings.

The leader said “You think you can take our brother and hand him to soldiers and live in peace. You think Allah will forget what you have done to our brother.

“My second message to you all is calling on you repent. We want you all to repent, once you repent we will not kill you.”

In the video, he also warned those who had arrested Boko Haram terrorists or has been spying against them to expect a similar fate.

“My third message is for those who apprehend our members and hand them to the military or give them a clue on where to find us. You should know that, unless you repent, what happened to your people is what you will get from us. We will not budge until we finish you all.”