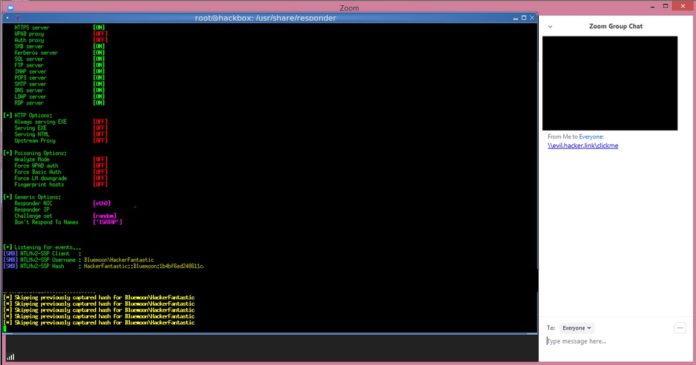 Zoom, the videoconferencing software that has recently skyrocketed in popularity due to the remote work requirement brought about by the coronavirus pandemic, is currently plagued with lots of security issues.

According to reports from several security researchers on the Internet, there’s a newly found vulnerability in Zoom that allows an attacker to steal Windows login credentials from other users. The problem stems from the fact that Zoom’s chat handles links inappropriately by converting Windows networking UNC (Universal Naming Convention) paths into clickable links. When a user clicks on such a link, Windows will leak the user’s Windows login name and password. Even though the passwords are hashed, this is still considered inappropriate application behaviour as hashed passwords are susceptible to compromise using the right tools.

Aside from the current issue, it has also recently been discovered that that Zoom doesn’t actually use an end-to-end encrypted connection for its calls, despite claiming to do so. Additionally, the app has also been alleged to leak users’ emails and photos to unrelated parties.

As if we’ve not had enough, Zoom software allegedly has some worrying features pertaining to privacy. As with any other issues, hackers hackers have recently been discovered to be leveraging the app’s newfound popularity to trick users into downloading malware