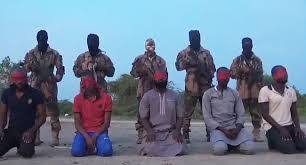 UN Secretary General, Antonio Guterres, has called on the Nigerian authorities to bring to justice the Islamic State group, Iswap.

The terrorist group has claimed responsibility for the killing of four aid workers and a security guard in Nigeria’s north-eastern Borno state.

Standing behind them are five other armed men wearing military clothing, with their faces covered.

The image appears to be a screen grab from a propaganda video. The Islamic State in West Africa Province, Iswap, is a splinter group of the Islamist extremist group Boko Haram.

The aid workers were kidnapped last month and their deaths confirmed earlier this week.

It underlines the risks humanitarian workers face in north-eastern Nigeria.

The region has seen more than a decade of violence from Boko Haram that has forced more than two million people from their homes and killed more than 30,000.